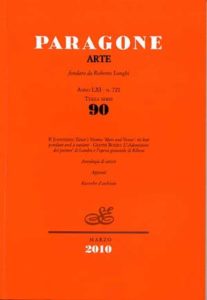 Gianni Bozzo
The large nocturne of the ‘Adoration of the Shepherds’ in the National Gallery, London, has had numerous and uneven attributions ranging from Velázquez to Zurbarán, Murillo and Giovanni Do, and is currently ascribed to an anonymous Neapolitan of about 1630. Its exceptional quality, monumental dimensions, and the undeniable feeling that it represents the youthful debut of a great unknown master have contributed to the picture’s status as an intense, unresolved art-historical riddle. This great painting reflects deep awareness of the sixteenth-century figurative culture of Rome, Lombardy and Emilia, but is determined above all by the rediscovery of truth in painting, as brought about by Caravaggio. As such it should be related to a Roman context of 1611-1615 and attributed to the young Ribera — that is, to the author of the ‘Apostles’ owned by Cussida, Gavotti, and Longhi, and of the celebrated ‘Judgement of Solomon’ in the Borghese Gallery in Rome, which lent its name to the master of the same title. It is also clear that the ordered, bright verismo permeating the London canvas can be used — thanks to the attribution to Ribera — as a starting-point for a number of developments and conclusions. If this finds consensus, it could redefine Ribera’s early activity and other far from secondary issues during a key moment for Italian and European painting of the seventeenth century.

Paolo Ervas
Lorenzo Costa’s slender graphic oeuvre can be expanded by the addition of a beautiful sheet with ‘Saint John the Baptist’ in the Brera Gallery; this was the model used for pouncing the design onto the wood panel of a painting housed in the same museum. Both works are currently ascribed with some hesitation to Andrea Solario, but the present writer had already attributed the painting to the Ferrarese artist without knowing its location or the existence of the graphic modello. A stylistic analysis of the drawing confirms the earlier attribution to Costa as well as a proposed dating to shortly after the artist’s move to Mantua in 1506, when his interest in Leonardo’s work began to make itself felt, no doubt stimulated by Isabella d’Este. The painting was perhaps destined by the Gonzaga marquesses as a gift for some eminent representative of the French court, as suggested by the coat of arms on the frame, believed by most scholars to be original; this also appears on a series of tapestries in the Hermitage Museum commissioned by Jacques d’Amboise.

Vittoria Markova
In 1923 Viktor Lazarev brought to light two masterpieces by Bronzino housed in Russia, the ‘Virgin and Child and Saint John the Baptist’ in the collection of the Pavlovsk Palace Museum near Saint Petersburg, and the ‘Holy Family with the Young Saint John the Baptist’ (the ‘Stroganoff Holy Family’) now in the Pus?kin State Museum of Fine Arts, Moscow. This article returns to these two works, and to their dating. Given its stylistic resemblance to the famous ‘Allegory’ in the National Gallery, London, the ‘Stroganoff Holy Family’ is dated to the mid-1540s, and the picture in Pavlovsk to 1550/1555; the identical version now in the Portland Art Museum, Oregon — long believed to be the original — should be regarded as a later copy or a forgery.

Gianni Papi
Among the images in Giuliano Briganti’s photographic library acquired by the City of Siena, the author has found a ‘Magdalen’, depicted as a timorous adolescent; he believes it should be attributed to Francesco Boneri, better known as Cecco del Caravaggio. Thus an important addition can be made to his still meagre catalogue, within which the new painting reveals an unknown side of the artist, more tender in character compared with the bold, even unconventional images — so energetic and iconographically outré – which we are used to seeing when we consider his work.

Davide Dossi
The scandal that swept up the Sicilian nobleman Fabrizio Valguarnera of the Barons of Godrano, guilty of stealing a sizeable consignment of diamonds from Spanish and Flemish merchants, involved various Roman Baroque artists he had commissioned paintings from in the period around 1630. Among these was the Veronese painter Alessandro Turchi, from whom two paintings had been ordered, as well as the completion of a third, formerly in his workshop. Two of these canvases, ‘The Presentation of Christ in the Temple’ (Dresden, Gemäldegalerie Alte Meister) and ‘Adam and Eve Lamenting the Death of their Son Abel’ (Grenoble, Musée de Peinture et de Sculpture) are described in detail in Turchi’s deposition during the trial before the Roman court, thus enabling them to be identified in the present article.

Barbara Guelfi
During the summer of 1621 Duke Cesare I d’Este planned on giving a painting of The Triumph of Bacchus to the Cardinal-Nephew Ludovico Ludovisi. As the relationship between the two families soured it seemed initially that this might hinder the success of the project, but when the situation gradually improved — as archival documents reveal — the planned gift appears to have been ensured. It is proposed here that the work was a painting of this subject attributed to Dosso Dossi (now in the Prince of Wales Museum of Western India, Mumbai), believed to have been part of the decoration of Alfonso I d’Este’s Camerino of paintings in Ferrara.

Lionello Puppi
Our knowledge of the correspondence relating to Titian is here enriched by two groups of letters, four rediscovered, and eight unpublished. First, the author identifies the current locations of four letters published in the nineteenth century and consequently regarded as lost. One, written by an anonymous kinsman of the painter on 15 October 1534 (now in the Biblioteca P. Bertolla of the Archiepiscopal Seminary in Udine) regards the relations between the community of Pieve di Cadore and the Government of Venice; the second, from Argentina Pallavicini Rangone to Titian on 26 April 1549 (now in the Biblioteca dei Concordi, Rovigo), expresses the gentlewoman’s wish to place a young protégé with the master, and refers to a portrait of Lavinia, Titian’s daughter; the third, dated 15 June 1567 (now in the Biblioteca Comunale, Forlì), was written to accompany Titian’s gift to Margaret of Austria of the engraving by Cort reproducing the so-called ‘Gloria’ painted for Charles V; the fourth (now in the Biblioteca Palatina, Parma) addressed by Titian to Cardinal Alessandro Farnese on 10 December 1568, asks for news of a ‘Saint Catherine’ that the painter had sent — but without a response — to the “cardinal Alessandrino”. Of the eight unpublished items, all discovered in the Biblioteca P. Bertolla of the Archiepiscopal Seminary in Udine, two are of special interest: a draft letter from Titian, datable between 11 November 1554 and June 1555, to Antoine Perrenot de Granvelle, who was eager to have a copy of a ‘poesia’ painted for Philip of Habsburg; and a reply from Titian to Granvelle written in January or February 1559, referring to a self-portrait. A missive from Gonzalo Pérez to Titian on 25 September 1565 is significant for its references to the ‘Last Supper’ and ‘Martyrdom of Saint Lawrence’, while an urgent note of Francisco de Vargas to Philip of Habsburg between 1552 and 1553 requests the painter’s son Pomponio be given Spanish “naturaleza” (citizenship). The remaining unpublished letters regard above all the management of the painter’s benefices.