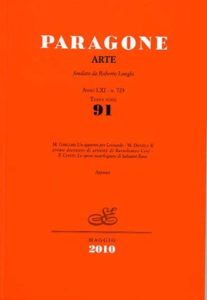 Mina Gregori
A ‘Portrait of a Young Woman’ on vellum, laid down on a small wood panel, is here attributed to Leonardo da Vinci. The dress and hairstyle of the figure reflect Lombard fashion of the 1490s.

Michele Danieli
This essay seeks to set the early work of Bartolomeo Cesi in its correct context within the late Mannerist period in Bologna. His early frescoes in the church of Santo Stefano (1574) echo the style of Prospero Fontana and Orazio Samacchini, in whose workshop Cesi may have spent some years. In the decoration of San Pietro (c. 1580), Cardinal Gabriele Paleotti sought to dictate how art should be in line with Church doctrine. Cesi took part in the project, but his fresco is lost, and an early copy of it is published here, enabling us to consider the whole cycle anew. Alongside Camillo Procaccini, Cesi frescoed the crypt of the same church in 1584, and the appearance of a lost fresco is restored to us by a new preparatory drawing. In his finest phase, between 1585 and 1590, the artist succeeded in reconciling Mannerist tradition and the burgeoning naturalism of the Carracci.

Floriana Conte
Among the few sacred subjects commissioned from Salvator Rosa for a public setting are the canvases with ‘Saint Jerome Hearing the Trumpet of the Last Judgement’ and ‘Saint Nicholas of Tolentino in Glory’ on the side walls of the chapel of the Pietà in the Cathedral of San Venanzio in Fabriano, and the ‘Saint Onuphrius’ in the Pinacoteca Comunale in Matelica, formerly on the altar of the Università dei Pannilana in the church of San Filippo. Relatively difficult access to the former Papal States and the reticence of the artist’s biographers would explain how little attention has been paid to these three paintings. Stylistically, the canvases in Fabriano can be dated to the period before Rosa’s Florentine sojourn, and may be compared with the work of other Neapolitan masters of that time. Archival research by the author has revealed the name of the patron of the canvases in Fabriano Cathedral and allow for a more precise chronology and the reasons for the choice of subjects.

Fabio Sottili
Palazzo Sansedoni, overlooking the Piazza del Campo in Siena, was enlarged by the Grand Ducal architect Ferdinando Ruggieri between 1733 and 1739. The patronage of Orazio Sansedoni (1680-1751), a courtier at the Medici-Lorraine court, was expressed not only through the expansion of the building but with the contracting of two view paintings of the Piazza del Campo with the arrival in Siena of the new Grand Dukes of Lorraine-Tuscany in the Spring of 1739; these emphasize the new appearance of the family’s palazzo and thus celebrate its dynastic greatness. The works (now in the collection of the Monte dei Paschi di Siena) were commissioned from Giuseppe Zocchi, the most highly-appreciated Florentine view painter of the mid-eighteenth century, probably as pictorial versions of engravings that were never executed.