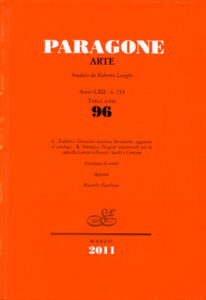 GIANLUCA ZANELLI
The identification of some interesting works attributable to Giovanni Lorenzo Bertolotto allows a reconsideration of the principal phases of this Genoese painter´s evolution; scholarship has now fully recognized his notable role within the Ligurian milieu between the second half of the seventeenth and the early years of the eighteenth centuries. After emerging from the workshop of his father Michelangelo, Bertolotto revealed an idiom deeply tied to the naturalism of Gioacchino Assereto. The Martyrdom of St James (canvas, signed and dated 1666), originally in the chapel dedicated to the saint in the destroyed church of San Domenico in Genoa, can be dated to this first phase. During the last decades of the seventeenth century, Bertolotto drew ever closer to Valerio Castello and Domenico Piola, abandoning his youthful references to Assereto; indeed the period between the 1690s and the early eighteenth century is marked by numerous works that show a clear revival of the figure types, compositions and colours typical of these two fundamental artists, and embracing the grand Baroque style; Bertolotto continued to work in this vein, with uneven results, until the end of his long career.

RICCARDO SPINELLI
A series of letters between members of the Corsini family and Filippo Niccolini casts light on an important aspect of the Florentine critical fortunes of contemporary Roman Baroque language. The letters refer to a project for the construction of a chapel in the church of the Carmine dedicated to Saint Andrea Corsini, initially requested from Andrea Sacchi and then from Pietro da Cortona. The Corsini, eager to have a monument reflecting the latest trends of the Roman Seicento, steered their taste towards the Eternal City and sought to involve not only Sacchi (who provided designs for the setting), but Guercino and Reni for the painting of altarpieces, Geminiani for frescoes, and Mochi and Duquesnoy for sculptures. Abandoned because of excessive costs, the project was taken up again in the mid-seventeenth century, with Pietro da Cortona providing studies needed for the construction and decoration of the chapel, and producing a wooden model. The unhappy outcome of this second initiative convinced the Corsini to also abandon the “Roman” plan for the design of the chapel and turn instead to a Florentine, Pier Francesco Silvani, who was assisted by Luca Giordano, author of the frescoed dome, and the young Giovan Battista Foggini, who was responsible for the execution of the three great marble altarpieces.

ALESSANDRO CECCHI
The reopening of the Galleria Nazionale d´Arte Antica in Rome, finally enlarged and restored, has enabled the conservation and new display of works in storage, including such important paintings as a Virgin and Child and St. Anne with a landscape background attributed to Denys Calvaert, which is here given to Francesco Salviati on grounds of style and dated to about 1541, on the artist´s return to Rome after sojourns in Bologna and Venice. This was the period of the Adoration of the Shepherds in the Uffizi Gallery, a work full of Northern reminiscences, whose style and form closely resemble our painting, of which a small replica exists in the Musée Granet in Aix-en-Provence.

MINA GREGORI
The technique of oil on paper used by the Carracci allowed for swift, direct rendering, and was used for portraiture. An unpublished sheet with a Head of an Old Man closely resembles the well-known Head of an Old Man formerly in the Ganz collection.

PATRIZIA TOSINI
A drawing formerly ascribed to Raffaellino da Reggio in the Hessisches Landesmuseum, Darmstadt is here attributed to the Marchigian artist Giovanni Battista Lombardelli, and compared stylistically with the frescoed Stories of Joseph he painted in the Palazzo Buzi in Orvieto in 1583/1585. The artist´s career was already fully established by this period, when he was engaged on a number of contemporaneous projects in Umbria and Rome. Lombardelli´s style in his drawings for mural painting is thus clarified, and considered as distinct from that of Raffaellino da Reggio, with whom he has often been confused. Two copies of the Darmstadt sheet exist in the Kupferstichkabinett, Berlin, offering evidence of replication, a practice already documented in Lombardelli´s workshop.

ALVAR GONZÁLEZ-PALACIOS
On 18 July 1797 Adriano Benotti, a Florentine nobleman, wrote to Grand Duke Ferdinand III proposing the sale of a pietra dura tabletop by the author of another table in the Florentine collection. Luigi Siries, Director of the Real Galleria dei Lavori, whose opinion was sought, answered on 10 August of the same year stating that the octagonal table offered to the Grand Duke had been made towards the end of the Medicean dynasty by craftsmen of the Galleria working on their own account and even using precious stones which actually belonged to the sovereign. Siries therefore believed that the octagonal table was of no interest to the Grand Duke and that its owner should have been allowed to sell it abroad. Since the tabletop discussed here is the only octagonal one of the late Medicean period, it must be the one that belonged to Benotti, which would explain why it appears not to have been recorded in the official documents of the Galleria dei Lavori.

GIUSEPPE PORZIO
This article offers an account of research carried out by the author on archival and published sources relating to key works by Battistello Caracciolo such as the Immaculate Conception in Santa Maria della Stella in Naples and the Virgin of Purgatory with Saints Francis and Clare formerly in Santa Chiara in Nola and now in temporary storage in the Capodimonte Museum. A review of documentation known thus far (of which the appendix provides the first full transcript) allows for a clearer chronology, and — especially as regards the second altarpiece — the definition of a likely context for its execution, based on the conjunction of historical data and iconography. As for the lost fresco cycle in San Gaudioso in Naples (one of projects cited most prominently in written sources on the artist), a hitherto unpublished bank statement securely dates it to 1616 and reveals its patronage. The article concludes by finally disentangling the complex critical and attributional wrangles regarding the two versions of the Lamentation over the Body of Abel in the Capodimonte Museum and the Galerie G. Sarti in Paris.