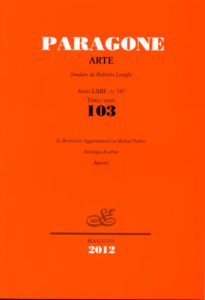 GIORGIO BONSANTI
This represents the author´s latest scholarship on Michael Pacher, about whom he has been writing since 1969. Using the monographic exhibition of 1998 in Novacella (Neustift) as a point of reference, the author offers a complete re-examination of Pacher, to whose earliest period he attributes a small Madonna with a bunch of grapes in the Diocesan Museum in Bressanone; he uses specific comparisons to demonstrate the relationship between Pacher and his anonymous fellow-countryman known as the Master of Uttenheim, as well as showing his awareness of Lombard art after a sojourn in Milan; and he confirms his reconstruction of the artist´s late phase, culminating in the Salzburg years. The article concludes with a presentation of two rare unpublished works: a panel (unfortunately fragmentary) in the Diocesan Museum in Bressanone with the Martyrdom of Saint Catherine, a youthful work from the period of the altarpiece for San Lorenzo in Val Pusteria (c. 1465); and a wooden sculpture of Saint Catherine in the Museum in Ulm — already recognised as a faithful copy of the saint in Hans Multscher´s altarpiece for Vipiteno — which may thus be Pacher´s first surviving work in carved wood.

GONZALO REDÍN MICHAUS
An altarpiece in the Monastery of El Escorial is attributed to Niccolò Soggi because of its clear resemblance to the Adoration of the Shepherds painted by him for the church of Santissima Annunziata in Arezzo, and the work is identified with the documented commission he received in 1521 from the confraternity of Saint Peter Martyr in Prato.

ARABELLA CIFANI E FRANCO MONETTI
During his lifetime, the painter Agostino Scilla (Messina, 1629-1700) was also a famed naturalist, scientist, philosopher and antiquarian. Sources record his brief sojourn in Turin in 1679, and while in Rome at the end of 1687 he painted two canvases for the Palazzo Reale in Turin, with figures of Fortitude and Justice, still in situ. In Turin his art was of interest not only to the sovereign but also to the extremely powerful family of the Conti Graneri della Rocca. Four oval overdoor canvases have been identified in the Palazzo Graneri in Turin; these masterpieces represent the philosophers Epicurus and Heraclitus, the poet Homer and the geographer Ptolemy, and should be dated to about 1680, although the date of their arrival in Turin (either before or after Scilla´s commitments for the Savoy court) is unclear. Appropriate conservation work could offer a clearer reading of the paintings, which is currently hindered by blackened layers of varnish.

GIUSEPPE MERLO
Between 1788 and 1791, a wing of the sixteenth-century Palazzo degli Averoldi “a Santa Croce” in Brescia, was the subject of radical restoration, both architectural and decorative, sponsored by the brothers Faustino and Giuseppe Chizzola, who were now its owners by inheritance. A rediscovered “Libro Fabbrica” enables us to follow the phases of this major Neoclassical project in Brescia, and identify those involved in its execution. Thanks to the accounting record, which pushes the date of the decoration of the Sala di Amore e Psiche back to 1791, we can clarify the debut in Brescia of one of the most prominent local Neoclassical painters, Giuseppe Teosa. A reading of the “Libro” casts light on the decoration of the salone, offering more precise information on its chronology and authors and providing the names of the executive architect and a group of upright artisans who worked together, each according to his ability, towards the successful outcome of this enterprise.

BRUNO TOSCANO
Roberto Longhi´s correspondence (1909-1927) with Giuseppe Prezzolini offers notable insights into the former´s youth, casting light not only on questions of character and vocation relating specifically to those years, but also on aspects that herald the much better-known Longhi of the decades that followed. Thus if the conception of art as a complex entity of rigorously formal construction was destined to undergo substantial rethinking, the identification of scholarship as “letteratura di accostamento”, and as a functional compendium of ancient and modern stimuli, was to be brilliantly confirmed in the evolution of Longhi´s writings.