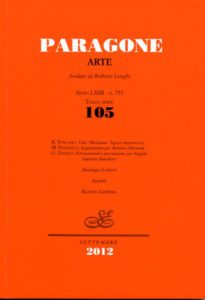 BRUNO TOSCANO
The author presents a carved wooden statue of the Virgin and Child (59 cm high), an evident creation of the fourteenth century and a work of superior quality, notwithstanding the loss of finish and polychromy. The solid construction of the group and the character of the two figures point to a date around 1330 and an attribution to the circle of Andrea Pisano; this is supported by comparison with celebrated pieces by the great sculptor from the period when he was working on the doors of the Florentine Baptistery and the decoration of the Campanile.A detailed reading of the work and further comparisons with examples of sculpture and ornament associated with Orvieto Cathedral lead the author to suggest that this Madonna was a product of Andrea´s first period in Orvieto, before his appointment as capo-maestro of the Duomo — a sojourn already posited by scholarship in a separate context.

MASSIMO FRANCUCCI
The publication of two important drawings by Antonio Gherardi, evidently preparatory for the Birth of the Virgin signed and dated by him in 1684 for the Sperelli chapel in Gubbio Cathedral, provides an opportunity to discuss the painter´s graphic oeuvre, hitherto known through a few sheets unrelated to his finished paintings. Outstanding among the most significant additions to his catalogue of paintings are a depiction of Purgatory (Ro Ferrarese, Fondazione Cavallini Sgarbi), a Holy Family with Musical Angels (Florence, Luzzetti collection), an Allegorical Portrait (private collection), a Saint Andrew in San Francesco, Rieti, and the great Rape of the Sabine Women, only known for the time being through photographic reproduction.

GIANLUCA ZANELLI
A study of the letters from the painter Angelo Giacinto Banchero to his brother Giacomo allow us to reconstruct the key phases in the artist´s life and how he frequented the Roman cultural milieu, principally the workshop of Pompeo Batoni. The Genoese painter moved to Rome in 1762, and this correspondence — known through nineteenth-century transcriptions — consists of eighty-three letters written to his brother Giacomo. Many unpublished drawings by Banchero are discussed, some of which — together with information found in nineteenth-century biographies of the artist — allow for a deeper understanding of the origins of some of the painter´s work for Genoese patrons, with whom he always kept in close touch.

ODETTE D´ALBO
This article presents some unpublished works by Orsola Maddalena Caccia (1596-1676), daughter of the painter Guglielmo Caccia, known as il Moncalvo. Two of these are depictions of Saint Ursula, a favourite subject for the artist, who was a nun in the Ursuline convent of Moncalvo, and a Virgin and Child and an Angel, both painted around the 1640s, during her most mature phase. On the other hand a small panel of the Virgin Adoring the Child Asleep on the Cross, rather inexperienced as regards composition and more closely tied to the work of Guglielmo Caccia, could belong to a very early period of her career, around 1615-1620.

FEDERICO BERTI
Old inscriptions on the back of two paintings on copper allow the author to trace the provenance of both works to the collection of the Marchesi Rinuccini in Florence. The works, known to scholars and attributed to the Florentine painters Jacopo da Empoli and Jacopo Ligozzi, remained in the prestigious picture gallery until the monumental auction of 1852, when they were offered for sale.

FAUSTO NICOLAI
This article presents two new documents regarding the decoration of the Contarelli Chapel in San Luigi dei Francesi, Rome. The first, dating from 1580, is an agreement between Girolamo Muziano and Matteo Contarelli to permanently interrupt the project begun fifteen years earlier with the commission to paint frescoes the chapel dedicated to Saint Matthew (as is known, this was never carried out). The second document is the contract of 1581 between Contarelli and the Flemish sculptor Jacob Cobaert for the creation of a series of statues to be placed within San Luigi and on its façade, among them a Saint Matthew and the Angel, part of a series of Four Evangelists. The direct commission of this statuary group by Contarelli to Cobaert — already in 1581 — is thus securely proved. The author also casts new light on the decoration of the church of the French Nation, involving numerous sculptures that were never executed.