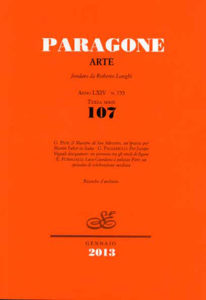 GIANNI PAPI
The author assembles a group of works that shape the outline of a most interesting painter, proceeding from a study of the two pictures in the apse of the Roman church of San Silvestro whose attribution has for some time posed an enigma. Two other stylistically similar paintings expand this oeuvre, a Judith Beheading Holofernes and a Salome. Links with the painting of Louis Finson and the precocious naturalism of this group of works — indicating a painter who was active in Rome and Naples in the years spanning 1610 — induce the author to hypothesise that the Master of San Silvestro was Martin Faber, one of Finson’s painter friends.

GIOVANNI PAGLIARULO
This essay reconsiders the activity of Jacopo Vignali (Pratovecchio 1592 – Florence 1664) as a draughtsman, concentrating on his figure studies. The time span discussed here ranges from the artist’s beginnings in the early 1620s to his late maturity in the 1650s, and allows one to follow his entire stylistic evolution and focus on the hallmarks of his drawing style. The works presented here, mostly preparatory studies, have been identified among drawings formerly classified as anonymous or attributed to other artists in Italian and foreign collections; the author can thus clarify some of the confusion and misunderstanding which had until now impeded a proper appreciation of Vignali’s diligence in drawing. This research casts light on groups of drawings confused in the past with work by Matteo Rosselli, Lorenzo Lippi and Cesare and Vincenzo Dandini, but also presents sheets formerly ascribed to Bernardino Poccetti, Jacopo da Empoli, Fabrizio Boschi, Bilivert, Giovanni da San Giovanni and Orazio Fidani. The selection of drawings concludes with a proposed attribution to Giovanni Montini, familiar as a pupil of Vignali but unknown as a draughtsman.

ELENA FUMAGALLI
This article is a study of the iconography of Luca Giordano’s canvas in the centre of the vault of the Sala Verde in Palazzo Pitti, painted in 1688 for the antechamber of the Grand Prince Ferdinando de’ Medici. The author offers an in-depth reading of the work using the notion of celebration of good government by the Medici through a topos of early Florentine history, the bellum faesulanum, and involving the virtues of Concord and Peace. It is here suggested that the person who devised the allegory was Alessandro Segni, a man of letters and prominent figure in the world of the Florentine academies, who worked for the Medici for many years.

SILVIA RONCUCCI
Based on new archival discoveries, the article reconstructs the various phases of the decoration of the interior of the church of Santa Maria della Sapienza in Siena, which took place during the third quarter of the eighteenth century. Numerous artists, both local and non-Sienese, took part in the project. Among the most important names are the Sienese architect Giovanni Battista Marchetti, the Florentine painter Giuliano Traballesi, author of the scenes from the life of the Virgin, the stucco modellers of the Cremoni family, who were responsible for the stucco elements, and the Sienese sculptor Giuseppe Maria Mazzuoli, author of the sculptures in the lateral niches. Their work contributed to giving the building its sober, late Baroque aspect, with elements that are already proto-Neoclassical in taste.