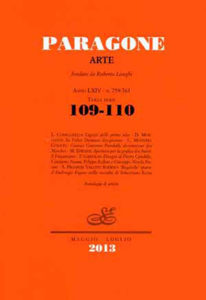 LUCILLA CONIGLIELLO
A substantial group of drawings by Jacopo Ligozzi, now housed in Germany, is published and discussed here, revealing the existence of a free, spontaneous graphic style that was entirely unexpected of an artist admired for his highly refined and slow execution. The sheets consist of initial ideas, compositional projects and studies of figures and details, and are related by the author to paintings, other preparatory drawings and commissions known from archival documents.

DENIS MORANTI
The author seeks to add a handful of attributions to the slim graphic oeuvre of the Umbrian painter Felice Damiani, only two of whose drawings are known today. All of the five sheets presented here, attributed to Damiani for the first time, relate to documented works by him.

CATHERINE MONBEIG GOGUEL
Giovan Giacomo Pandolfi (Pesaro 1567-after 1636) is one of the most emblematic painters of the Marchigian School, his style marked by both Federico Barocci and Federico Zuccari. Luigi Lanzi records him among the four “scolari” of the latter, and Carlo Cesare Malvasia praised his activity as draughtsman. Pandolfi’s drawings, like those by Filippo Bellini, with whom he is sometimes confused, have been classified under the most diverse names. Philip Pouncey assembled a few sheets he assigned to the “Master of the Zuccaro drawing at Windsor”, but did not succeed in identifying the artist. This essay presents many unpublished drawings by Pandolfi, some of which are here related to corresponding paintings, all of them in the Marches.

MARIO EPIFANI
Taking as its starting-point the meagre early sources (first and foremost the Vite by Bernardo De Dominici) and the attributions found in seventeenth- and eighteenth-century collections, this article offers a critical analysis of the graphic oeuvre attributable to Cesare (1605-1652) and Francesco Fracanzano (1612-1656), painters from Puglia who joined the widespread following of Jusepe de Ribera in Naples. Notwithstanding the almost total absence of precise links between drawings and paintings, the graphic style of the brothers is identified using the evidence of early inscriptions on sheets and historicized attributions (inventories, catalogues, etc.), as well as comparisons with the drawings of Ribera and Lanfranco, the acknowledged luminaries of Neapolitan art in the first half of the seventeenth century.

FRANCESCO GRISOLIA
Four drawings with uncertain or erroneous attributions are presented here with their correct authorship. These consist of a study by the Flemish painter Pieter de Witt (Pietro Candido), preparatory for the Adoration of the Shepherds painted during his Tuscan period; a drawing — the first one proposed thus far — by the Roman Girolamo Nanni for the Allegory of Promptness frescoed in the apartment of Paul V Borghese in the Vatican; a double sheet by the Marchigian Filippo Bellini connected to his last work, the Last Supper in Macerata Cathedral; and a study by Pietro da Cortona’s follower Giuseppe Nicola Nasini (until now classified as the work of a Roman late Mannerist) for the Council of Nicea and the Condemnation of the Arian Theses frescoed in the Oratorio della Santissima Trinità in Siena in 1696.

SIMONETTA PROSPERI VALENTI RODINÒ
Among the many works owned by the drawings collector Sebastiano Resta (1635-1714; a Milanese native long resident in Rome, where he was an Oratorian at the Chiesa Nuova) was an album of studies by Ambrogio Figino, sold by him to the Florentine Francesco Maria Niccolò Gabburri in about 1710, and now in the Morgan Library & Museum, New York. Before parting with it, Resta removed a number of sheets, some of which have now been identified by the author in the Gabinetto Disegni e Stampe degli Uffizi, Florence and the British Museum, London. Resta also owned other drawings by Figino, illustrated here. This initial study of Lombard drawings owned by Resta reveals that he kept in touch with the Milanese art world throughout his life, establishing correspondence with painters, collectors, art experts and dealers, from whom he continually requested drawings, and to a lesser extent paintings, which he then sold on the Roman art market.

PATRIZIA TOSINI
This article restores two unpublished drawings to the graphic oeuvre of Ferraù Fenzoni. The first (Oxford, Christ Church) may be related to works executed by the artist from Faenza during the time he spent in Todi, between 1593 and 1599. The second (Munich, Staatliche Graphische Sammlung) cannot be directly associated with other known works by him, but its handling, red chalk technique and iconography resemble those of a group of youthful drawings executed by the painter between 1580 and 1587.