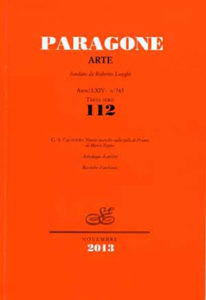 GIACOMO A. CALOGERO
The focus of this essay is on the vicissitudes of the Pesaro altarpiece by Marco Zoppo, of which the main panel is in the Gemäldegalerie, Berlin. The grand work, executed in 1471, was made for the high altar of the church of the Observant Franciscans, and was almost certainly commissioned by Alessandro Sforza, Lord of Pesaro. During the 1500s, however, the painting was moved to the Observants’ new church, financed by Duke Guidobaldo II della Rovere to replace the earlier, destroyed building. Zoppo’s altarpiece remained in the new church until the early 1800s, when it was dismembered and dispersed. Substantial objections are made here to the hypothetical reconstruction of the work by Lilian Armstrong (1976), subsequently reformulated by Peter Humfrey (1993), with special reference to panels which may have formed part of the predella, but which appear to have little relation to the Pesaro altarpiece. As regards one of these, the celebrated Severed Head of John the Baptist in the Museo Civico, Pesaro, the attribution to Giovanni Bellini is once again put forward.

DAVIDE DOSSI
In the 1580s, Paolo Farinati began to use pietra di paragone (touchstone) as a support for his paintings. Only about ten such works by the Veronese artist are known today, often consisting of smaller replicas of earlier, larger compositions. The Pietà with Saints John and Mary Magdalen and the Mystic Marriage of Saint Catherine, with the Magdalen, both published here, provide an occasion to discuss some hitherto little-known aspects of these kinds of paintings, such as Farinati’s secular patrons who commissioned works on stone, and the question of frames created for such pictures. The first of the two works can be connected to the Veronese patron Niccolò Maffei, while the second has its original frame, which recalls the stucco decorations of the Palazzo Thiene in Vicenza and some of the frescoes in the Palazzo Te in Mantua.

SILVANA BAREGGI E FILIPPO MARIA FERRO
Some unpublished drawings by Tanzio da Varallo have recently appeared in Swiss private collections, and are presented here. They originally belonged to a series, as proved by the pen and ink numbering they bear, written in an early hand, and had been pasted down, forming a collector’s album or possibly a working notebook by the master. The numbering connects them with other sheets, already known to scholars, and some of their provenances can be traced to the same early collections. They are preparatory drawings for works from the artist’s last years, in particular for the frescoes in the Nazari Chapel in Novara and those in Sant’Angelo Lodigiano, for the Sabbia altarpiece, and for the Rest on the Flight into Egypt in Houston. The drawings confirm Tanzio’s passionate draughtsmanship, with expressive intensity as the goal in every detail, whether this was spiralling drapery, the pose of a hand, or a gesture. The artist made a note of each of his thoughts, and retained it, as he sought to explore the moti affettivi, in the truest Lombard tradition.

STEFAN ALBL
The rediscovery of a hitherto unknown painting by Pietro Testa among the photographs assembled by Roberto Longhi allows for some considerations on his activity as painter during the 1630s, and especially on his relationship with Poussin and Cassiano dal Pozzo. This is followed by an analysis of a drawing of Ecstasy of Saint Francis bearing the Barberini coat of arms, which may therefore have been the result of a commission from Francesco Barberini.

MARCO RICCÒMINI
The article assembles drawings by Donato Creti (1671-1749) discovered in public collections, near and far, which have appeared on the art market since the publication of the catalogue raisonné of the Bolognese artist’s works on paper by the author of this article. A critical commentary on these works is accompanied by the presentation of two sheets by a still anonymous hand, referred to here as the “Amico di Donato”; and by hitherto unpublished photographs of two Boys, perhaps on canvas, now untraced but once in a Milanese private collection. An appendix contains the literature discovered after the publication of the author’s catalogue, together with critical comments.

ROBERTA PICCINELLI
A recent systematic search through the “Carteggio dei segretari” files of the Mediceo del Principato collection in the Florentine State Archives, has cast light on two Milanese commissions received by the painter Pietro (Pier) Dandini during the 1680s. Read in chronological order, the documents enable us to provide detailed context for the execution of the portrait of the Gran Principe Ferdinand de’ Medici painted by Dandini and sent by him to Francesco Bondicchi, the Medicean resident in Milan, between 1678 and 1679, and to focus on a work painted by the Florentine master for Carlo Maria Maggi in the last months of 1687. When the Milanese literary scholar’s daughter Maria Rosa Felice took the veil, Dandini was commissioned to paint The Annunciation with the Holy Spirit and two Angels; this canvas, for which Maggi paid 40 scudi, was made for the convent of Santa Maria Annunziata, known as S. Maria dei Sette Dolori or S. Maria delle Carcanine, in Milan.