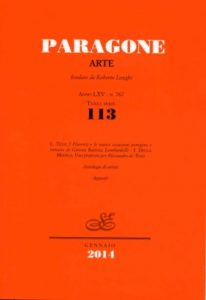 LAURA TESA
The palazzo of the Florenzi family in Perugia, completed in about 1585, a cycle of ceiling frescoes with allegorical figures and views narrates the salient episodes of the religious and political life of Cardinal Michele Bonelli, great-nephew of Pope Pius V Ghislieri and protector of Marcantonio, the principal author of the Florenzi family fortunes. The frescoes are here attributed to Giovan Battista Lombardelli, a Marchigian painter who was very active in the Rome of Gregory XIII and Sixtus V, and involved in various important Perugian projects. The author clarifies the chronology of his sojourn in Perugia, which only began in the late 1580s, presents his unpublished monochrome Stories of Saint Peter and Saint Paul in the Abbey of San Pietro (1591), and casts light on his contribution to the decoration of the Basilica at Loreto (1591). The hand of Lombardelli, together with those of his fellow Marchigians Pasquale Cati, Vincenzo Conti and Antonio Viviani, is also identified in the contemporaneous frieze paintings with Stories of Moses in the Sala dei Palafrenieri of the Palazzo Altemps in Rome.

ILARIA DELLA MONICA
A face is given to works recorded in inventories regarding Alessandro de’ Pesci, a painter active in Rome between the end of the 1600s and early 1700s who specialized in still life scenes with fish, molluscs and crustaceans. Hitherto known only through numerous inventory listings in important collections, he emerges as an artist obviously favoured by Roman taste in the late seventeenth century. His painted oeuvre surely indicates the existence of a workshop, given a substantial output that often included compositions replicated according to a basic model, not to mention the probable activity of his son, who produced similar paintings. The author’s study moves from descriptions based on inventories to the dual study of iconography and historical reconstruction.

GIANNI PAPI
The author presents an unpublished Martyrdom of Saint Bartholomew by Ribera, supporting the new attribution with a series of close comparisons with the painter’s earliest works from his Roman sojourn, and thus proposing that this canvas dates from the period 1610-1611 and was painted in Rome or Parma. The new painting is therefore the first version (and the only one, as far as we know, executed before his move to Naples) of a subject that was to be particularly favoured by Ribera, and which he treated on a number of occasions during his long Neapolitan residence, always varying his iconography. The author goes through the versions painted during the initial years of this sojourn, noting the presence of a copy of the new Martyrdom in the Carafa della Spina chapel in the church of San Domenico.

GUIA FANTUZZI
The subject of this essay is the new attribution of the frescoed tabernacle in Via Palazzuolo in Florence, traditionally given to Giovanni da San Giovanni; considering its recent restoration the author has identified the hand of Cecco Bravo, an equally talented painter who was active in the same period. The attribution, supported by a drawing ascribed to Cecco Bravo in the Scottish National Gallery in Edinburgh, has been confirmed by a brief note contained in a manuscript in the State Archives in Florence. Given the few public or sacred works by Cecco Bravo that have come down to us, this small-scale composition constitutes an addition to both these categories. The subject of the fresco, Christ with Joseph and Mary, has been connected with the Christian and social doctrines of Ippolito Galantini, founder of the nearby Compagnia dei Vanchetoni, whose oratory was frescoed by a number of seventeenth-century Florentine painters including Cecco Bravo.

ANDREA BERTOZZI
The life of Biagio Manzoni has always been a mystery. Long confused with a certain Michele who killed at an early age in 1666, the painter left his most vividly Caravaggesque mark in Romagna, with a legacy of solely sacred works, which are true paeans to the humanity of the peasant world. Roberto Longhi was the first to take an interest in this caravaggesco di periferia, recognizing the raw truth of his style, at its most intense in the Martyrdom of Saint Eutropius, and situating his activity in Faenza between 1620 and 1635, after a probable apprenticeship in Rome. The author has discovered the certificate of the artist’s baptism in the Archivio Capitolare in Faenza, dated 1 May 1595. While Manzoni’s initial apprenticeship in his native city remains the subject of conjecture, his Roman sojourn may be supported by documents in the stati d’anime (parish records) of 1614-1617.