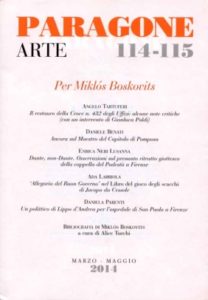 ANGELO TARTUFERI
Restoration of the painted Cross no. 432 of the Uffizi Gallery, carried out between late 2012 and early 2013 by Rita Alzeni, under the direction of the author of this article, is unquestionably one of the most important conservation projects of recent decades with regard to late Mediaeval Italian painting. The removal of the ponderous upper panel added during the 1940s has given a new energy to the wooden structure of this extraordinary masterpiece, while the cleaning of the painted surface has fully revealed the very high level of material content and execution of the work, which should most plausibly be dated to about the middle of the twelfth century. The unknown author of the Crucifix is one of the most outstanding figures of early Italian painting.

DANIELE BENATI
Returning to an essay Miklós Boskovits wrote in 1990 about the pictorial decoration of chapter houses, the author re-examines the frescoes in the chapter house at the Abbey of Pomposa, confirming their close dependence on those painted at the beginning of the 1300s by Giotto in the convent of the Santo in Padua. Reconsidering that the ‘Maestro del Capitolo di Pomposa’ may be the author of the Virgin and Child (thus attributed by Boskovits) once in the Lehman collection and now in the Metropolitan Museum of Art, New York, and a small Maestà and Saints in a private collection, evidently by the same hand (although believed by Luciano Bellosi to be by a Florentine Giottesque painter), he raises the possibility  that the Pomposa master may be identified as a “magister Cheyus de Florentia” recorded in 1317 as a witness to a document drawn up in the chapter house at Pomposa. After having travelled with Giotto to Padua and having worked independently at Pomposa, this artist could have returned to Florence during the 1320s, thus justifying the stylistic evolution, based on Giotto’s subsequent work, that we see in the small Maestà and Saints.

ENRICA NERI LUSANNA
This article reconsiders the so-called portrait of Dante in the frescoed Paradise in the Magdalen Chapel of the Palazzo del Podestà in Florence, and accepts it as an effigy of the poet, for both its affinities with the other portrait in the Palazzo dei Giudici e Notai and the attributes (a book and an apple branch) held by the figure, unique among the figures in this Paradise. According to the author, the book alludes to the Commedia, while the branch would be justified by the figurative equivalent of the Dantesque metaphor of the apple tree, which symbolizes redemption in Canto XXXII of Purgatory. This interpretation, presupposing the increasing prevalence of early commentaries on the Commedia in Florence, would suggest the fresco was painted shortly before 1337, the concluding date of the cycle conceived by Giotto and continued by workshops stylistically close to Stefano Fiorentino and Maso di Banco. This would thus rule out recent chronologies that have instead dated the frescoes during the 1320s.
The author also hypothesizes that Dante’s official rehabilitation might have been favoured in part by Jacopo Gabrielli, who played an important role on the Florentine political stage during the 1330s. Especially at a time when the Commedia was asserting itself, Jacopo would have sought to banish from his family’s memory the fateful decision made by his father Cante to send the poet into exile.

ADA LABRIOLA
The treatise on chess (Libellus super ludo scaccorum) by the Dominican Jacopo da Cessole, composed around 1300, offered an allegorical interpretation of the ancient game. The geometrical hierarchy of the chessboard reflected a vision of social concord, corresponding to the theories of the common good and the ethical foundation of the civitas as expressed at that time by such great Dominican preachers as fra Giordano da Pisa and fra Remigio dei Girolami. The Biblioteca Nazionale Centrale in Florence houses two Tuscan manuscripts considered to be among the oldest Italian-language texts of the Libellus, illustrated by still substantially unpublished watercoloured drawings with allegorical representations of the chess-pieces. The illustrations in MS Landau Finaly 25 are attributed to the ‘Primo Maestro dei Corali del Duomo di Siena’, whose authorship can be assigned to one of the principal Sienese miniature painting workshops of the period between the 1290s and the first quarter of the 1300s. The author also recognizes the work of a Florentine follower of Pacino da Bonaguida, circa 1340, in MS Magl. XIX.91.

DANIELA PARENTI
An examination of documents and iconography leads the author to propose that the great triptych of the Virgin and Child Enthroned with Saints attributed to Lippo d’Andrea in the Galleria dell’Accademia in Florence was the altarpiece of the chapel of the Hospital of the Friars of Penance of the Third Order of Saint Francis, later known as the Ospedale di San Paolo dei Convalescenti. Commissioned in about 1430 by the hospitaller Stefano di Giovanni Sardelli, the work was probably made for the chapel at the end of the ward that received the poor and sick and formed the hub of the patients’ devotional life, as well as being a customary part of hospital architecture, as proved by altarpieces from other charitable institutions in Florence and its surrounding area. Furthermore, a study of the historical events that determined how Lippo d’Andrea’s painting passed to the Florentine Galleries provides useful clues for a reconstruction, albeit partial, of the early artistic patrimony of the Ospedale di San Paolo.