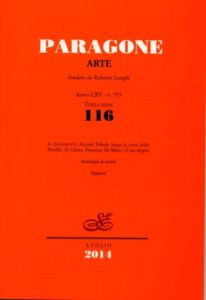 ALESSANDRA GIANNOTTI
The Goddess of Nature (1528-1529, Fontainebleau, Château) reveals Tribolo’s talent for ornament. This develops an idea that can be attributed to Giulio Romano, and also reflects awareness of the grotesque incrustations of Giovanni da Udine and the drilled marble work of the Sienese artists Angelo and Lorenzo Marrina. To these experiences Tribolo added his study of Silvio Cosini on the walls of the New Sacristy in San Lorenzo, and the Florentine works of Michelangelo and Andrea del Sarto. There is also an echo of his sojourn on the Tuscan coasts, repeated several times between 1525 and 1528, which had drawn him into the circle of Andrea Sansovino and the Hispanophile artists linked with Ordóñez. This is precisely when he worked alongside Stagio Stagi, who had recently been active in the workshop of Pandolfo Fancelli, a significant collaborator of the Spanish master. This connection appears to have led to Tribolo’s work on the transept altars of Pisa Cathedral (dedicated to Saints George, John and Francis, and Mary and Clement), as well as his acquaintance with a Francesco di Vincenti da Firenze, perhaps identifiable with Francesco di Vincenzo da Sangallo.

STEFANO CAUSA
An unpublished Lamentation over the Body of Christ in a private collection is here attributed to the Neapolitan painter Francesco De Mura (1696-1782); a hitherto unknown workshop replica of the painting exists in the convent of the church of Santa Caterina da Siena a Cariati, in Naples. Judging by style, it appears that the first version, at least, belongs to the painter’s early maturity, around the year 1725. The addition of this painting prompts the author to reflect on the initial activity of De Mura, who was the chief pupil of Francesco Solimena; at the same time, it provides an occasion to reconsider the critical fortunes of Neapolitan eighteenth-century painting in the writings of Roberto Longhi and those of his main students and scholarly contemporaries.

ELISA ACANFORA
The article is about the rediscovery of the altarpiece that marked Francesco Furini’s début. This is a canvas housed in the church of Santa Maria a Vezzano in the Mugello, recorded by Filippo Baldinucci in his biography of the painter as “his first work in oil”, sent to the Mugello. Believed to be lost by modern writers, it stands at the very beginning of his oeuvre, preceding the well-known Crucifixion with Saints Bartholomew, John the Baptist and Magdalen in Todiano, which was completed by the nineteen-year-old artist between 25 March and 10 April 1623. The author provides new details about Furini’s youthful period and reflects on a lost fresco he painted in the Florentine church of San Procolo, as well as discussing his role within Matteo Rosselli’s workshop during the decoration of the villa at Poggio Imperiale.

ERICH SCHLEIER
A hitherto unknown painting by Giovanni Lanfranco recently surfaced at auction, with the author’s attribution to the master in the sale catalogue. The subject was erroneously given as Venus with Putti, although the picture was correctly dated to c.1630/1633. Only after the sale, in the home of the new proprietor, a small, hardly visible crescent moon was detected on the forehead of the bathing woman, thus identifying her as Diana. It then became possible to connect the newly-emerged picture with a painting of that subject — a rare one — by Lanfranco described in four 17th-century Barberini inventories: the posthumous inventory of Don Taddeo Barberini, first Prince of Palestrina, one of the three nephews of Urban VIII (1648-49 inventory, without the artist’s name) and in three inventories of the possessions of Don Maffeo Barberini, the son of Taddeo and second Prince of Palestrina. The latter’s posthumous inventory of 1686 includes the artist’s name, and the measurements correspond.

GIANNI PAPI
The author identifies an unpublished Adoration of the Shepherds by Carlo Ceresa among the photographs in the Fondazione Federico Zeri, where it was listed as by Niccolò Musso. The painting, whose current location is unknown, should be considered as one of the Bergamasque artist’s most naturalistic works.

FEDERICO BERTI
The article presents some rediscovered oil sketches for relatively well-known works of the Florentine Settecento: the Passing of Saint Romuald and his Ascent into Heaven, the sole reflection of the lost painting recorded by early sources as having been painted by the young Francesco Conti for the monastic church of Santa Maria degli Angeli; the new Adoration of the Shepherds by Anton Domenico Bamberini, an unpublished study which — together with the canvas in Salzburg — provides evidence for the genesis of the painter’s small altarpiece housed in the church of San Lorenzo in Campi Bisenzio; and the Apotheosis of Diana, a sketch by Ranieri Del Pace for the monumental fresco on the ceiling of the eighteenth-century salone of Palazzo Arrighetti in Via del Giglio in Florence. In conclusion, the author publishes Giovanni Domenico Ferretti’s preparatory canvas for the lunette with the Preaching of Saint Louis Bertrand, one component of the decoration of the church of the Convento del Maglio near Piazza San Marco.