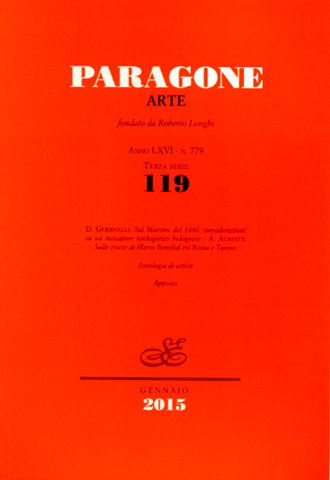 DANIELE GUERNELLI
The essay is dedicated to one of the principal manuscript illuminators active in Bologna during the second quarter of the 1400s, the so-called Master of 1446. The artist’s name comes from the Statuti della Compagnia dell’Ospedale di Santa Maria del Baraccano, the starting-point for the reconstruction of his oeuvre. The article presents two newly-discovered works of his, a Book of Hours enriched by an illuminated initial with a Saint (Dominic), and a copy of Bartolo da Sassoferrato with a decorated frontispiece depicting a beautiful scene of medieval teaching. The author also provides an outline of the artist’s place within the context of Bolognese book decoration, rejecting an earlier suggestion regarding the fusion of his catalogue with that of the Master of 1428, another Bolognese artist who was a primary source for the style of our illuminator.

ALESSANDRO AGRESTI
New studies on three overdoors in the Palazzo Reale in Turin, here reattributed to their rightful author, Marco Benefial, clear the path for further revisions and additions to the Roman artist’s oeuvre. His authorship is proposed for a painting of Saint Catherine Exhorting Gregory XI to Return from Avignon to Rome, the National Museum in Stockholm (formerly ascribed by Anthony M. Clark to Sebastiano Conca), the Virgin and Child in a private collection, the Allegory of Faith in the Lemme collection (the modello for the fresco of the same subject in the Palazzo Chigi-Zondadari, Siena), the Maries at the Sepulchre formerly with Dorotheum in Vienna, and the Expulsion of Adam and Eve formerly with Sotheby’s, New York. Other works are also presented here, including the altarpiece with the Virgin and Child with Saints Anthony of Padua, George and Lucy in the parish church at Ostra and the Portrait of Paola Odescalchi Orsini formerly in the Orsini collection in Rome. Finally, the Portrait of Filippo Bernualdo Orsini in the Fondazione Giorgio Cini, Venice is attributed to Francesco De Mura, and the article concludes with a Portrait of a Woman, signed and dated 1763, Benefial’s last known work.

GIANLUCA DEL MONACO
Two pictures in the photo archive of the Fondazione Longhi in Florence reproduce a one-column miniature depicting a ‘University class’. The miniature is there stated to be a decoration from the Vatican Library’s MS. Vat. lat. 1456 and is attributed to the celebrated ‘Illustratore’, the principal Bolognese illuminator of the second quarter of the fourteenth century. In fact it decorates the beginning of a text by the jurist Baldo degli Ubaldi in Vat. lat. 2233 (fol. 167). This manuscript opens with a two-column miniature representing a ‘University class by Giovanni di Andrea’ formerly attributed to the Illustratore. The author prefers to consider this illumination as a work of a follower of the Illustratore, the Master of 1346, and believes that the miniature in the Longhi photographs can be attributed to the same artist. This artist’s work is representative of a movement that began in the mid-fourteenth century to temper the more fantastic, expressive qualities of Bolognese Trecento art in favour of a more plain, direct style.

EMANUELE ZAPPASODI
The article presents an unpublished painting on panel by Andrea del Brescianino, housed in the Maagdenhuis Museum in Antwerp and here attributed to his maturity. The author discusses its links with the artist’s oeuvre of the same period, and its debts to other paintings of the early sixteenth century.

CARLO FALCIANI
The article presents the lateral panels that originally flanked the altarpiece with the Adoration of the Magi painted by Giorgio Vasari in 1547 for the church of Olivetan monastery of Santa Maria in Scolca, near Rimini. According to Vasari’s own record, the decorative cycle also included frescoes, destroyed around the middle of the seventeenth century, when an entire wall was torn down to create the space for a curved apse. It was probably at that point that the side panels of the altarpiece were removed and placed in the convent, where they are still recorded in 1726, when the friars presented them to the Prince of Avellino, who was residing in the city. From that moment on all trace is lost of the two paintings. Cleaning has freed the two scenes from nineteenth-century repainting and has recovered the architectural motif visible on the flooring of the left-hand panel, which matches perfectly with the corresponding step in the Rimini altarpiece.

ANNA ZANOLI
Pier Paolo Pasolini asked to shoot one of the scenes in his film Teorema (1968) in the home of the architect Guglielmo Mozzoni, an innovative stilt house called “La Zelata” set on grounds surrounded by woods near the river Ticino. The felicitous interaction of building and landscape made such an impression on the director that he sought out a remarkable natural setting for himself, and a house in which he could create something original, of the kind he had seen in “La Zelata”. He had become very fond of a landscape in Upper Lazio during the shooting of The Gospel According to Saint Matthew, and after having purchased property in that enchanted place, entrusted the project for the residence to Dante Ferretti, who was then working with him as a young set designer. The architect of “La Zelata” who lived to the age of ninety-nine, never lost his fervent youthful inventiveness, and devoted himself until his death in 2014 to an audacious project involving highly advanced technology: the “Città Ideale”.