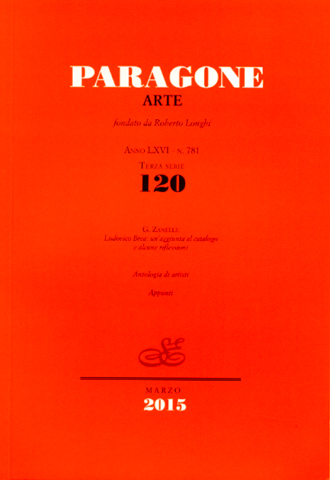 GIANLUCA ZANELLI
This article focuses on a new addition to the oeuvre of Ludovico Brea (documented in Nice and Liguria between 1475 and 1523), a panel with Saint Petronilla commissioned from the master by a small community or confraternity somewhere along the western Ligurian coast, or more likely in the Alpes-Maritimes, a territory with widespread devotion to the saint. The painting is datable to the first or second decade of the 1500s and its style closely resembles that of several works carried out by Brea in the same period for Genoese religious institutions, such as the Coronation of the Virgin (Genoa, Museo di Santa Maria di Castello), completed in 1513, or the Annunciation (whereabouts unknown), commissioned in the same year by a confraternity based in Sant’Ugo in the church of San Giovanni di Prè.

GIANNI PAPI
The author identifies an unpublished and important Saint Sebastian by Louis Finson, unquestionably painted in Naples during his very early period (maybe in 1607). The work is especially significant because — perhaps more than any of the known versions by the Brugesborn artist painted during his Neapolitan sojourn — it proclaims a powerful link with Caravaggesque naturalism. The picture also has pronounced connections with the Neapolitan artistic milieu, and above all Tanzio da Varallo, with whose work the new paintings shows remarkable affinities, specifically with a Martyrdom of Saint Lawrence on copper in a private collection.

VITTORIA MARKOVA
This article presents two paintings by Antiveduto Gramatica, each a depiction of the same subject, a Girl Holding a Dove. The picture in an Italian private collection is almost monochrome, while the other, recently on the art market, is coloured. Judging by their style, the author dates them both to the first half of the 1610s.

ELISA ACANFORA
The article presents some unpublished drawings attributed to Sigismondo Coccapani. Two of these are preparatory for the well-known Erminia and the Shepherds in a private collection, initialled and dated 1620. The connection with a work of accepted authorship and secure date is of particular interest for the clarification of the graphic oeuvre of this Florentine artist, praised by his contemporaries as an excellent draughtsman, yet often confused with Lodovico Cigoli, who was his teacher.

MANUEL GARCÍA LUQUE
An unpublished painting of the Virgin of the Immaculate Conception by the Neapolitan painter Andrea Vaccaro, housed in the church of Saint James in Granada, is presented here. The work is signed with the artist’s monogram and is one of the most successful versions of a subject he treated on a number of occasions.

MARTA FOSSATI
Building on her past research on the Florentine painter Antonio di Donnino del Mazziere, the author reviews the available biographical data, expanding it through unpublished documents, notably the notice of Antonio’s death, which occurred on 22 September 1547. Considered together with known documents such as his will and the decima granducale (tax census), this offers a broad range of information on his family situation, finances and civic activities during his mature years; but there is very little known about his youth. However, an unpublished hypothesis formulated by Gaetano Milanesi may help connect the artist with two lost projects — painted between 1523 and 1527 for a Florentine confraternity, the Compagnia della Purificazione della Vergine e di San Zanobi — which could furnish additional data for the chronology of Antonio’s early career.

ANGELA MARIA D’AMELIO
The article presents a curious and little-known collection of prints — entitled The Betrothal of Marfisa and representing the key moments prior to a fashionable wedding — made in Florence in the 1790s by Giuseppe Piattoli and Carlo Lasinio. Apart from defining the role of the two artists, the author identifies some of the iconographical and literary sources that probably inspired the ten plates in this series, which are here connected with preparatory drawings in the Fitzwilliam Museum, Cambridge and an unpublished small oil painting of The Marriage Contract (Rome, Museo di Roma), the only known painted version of this subject.