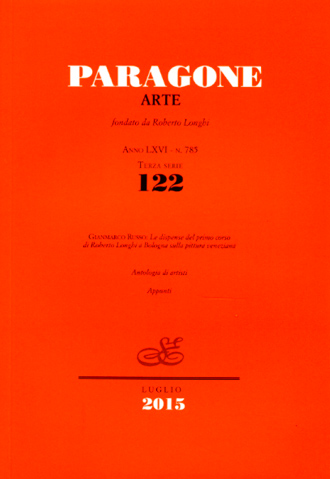 GIANMARCO RUSSO
The article presents the lecture notes from the first of three university courses on Venetian painting taught by Roberto Longhi at the University of Bologna (1945-1946). Preserved in typescript form in the library of the Department of Visual Arts in Bologna, the volume regards the same topics addressed in a concise, razor-sharp manner in Longhi’s contemporary Viatico per cinque secoli di pittura veneziana (1946), embracing a period of about two centuries, from the Trecento of Paolo Veneziano to the Quattrocento of Giovanni Bellini. Through its dissection of the most significant parts of these notes, the article casts light on their concordance with other celebrated essays by Longhi (especially his “Lettera pittorica” a Giuseppe Fiocco, Giudizio sul Duecento and Viatico), offering a response to thorny questions concerning fourteenth- and fifteenth-century Venetian painting left unresolved or unaddressed in Longhi’s text of 1946.

LUCA PEZZUTO
This article seeks to draw attention to an unpublished sheet housed in the Metropolitan Museum of Art, New York with a generic attribution to the Central Italian School. The Saint Leonard and Episodes from his Life (MMA, 2012.450) should instead be connected through its style and inscriptions to the area around L’Aquila by comparison with the oeuvre of one of the masters active in that region. It is likely that this is not only the first known graphic work by the painter and miniaturist Francesco di Paolo da Montereale (circa 1475-1549, documented from 1508), but the only known drawing of the entire School of the Abruzzi from the beginning of the sixteenth century.

MAURO PAVESI
It is immediately clear that an unpublished Flight into Egypt in the Molinari Pradelli collection is a work of the Lombard School of the early seventeenth century. Formerly attributed to Giulio Cesare Procaccini, it has features that instead point to the hand of Giovanni Ambrogio Figino. Support for this new attribution can be found in the forms of the animated drapery, which recall paintings and drawings from the artist’s last period (ranging from the organ shutters for Milan Cathedral of 1590-95 to the works of the early Seicento), together with other aspects, such as the insistence on anatomy in the figures. With its correct authorship recognized, the canvas provides a clearer view of the artist’s late phase, showing that he was capable, in a privatelycommissioned work, of going beyond the declamatory, emphatic excesses of Michelangelesque idiom found in his more laborious works, such as the organ-shutters or the Saint Victor cycle in Milan.

GUENDALINA SERAFINELLI
The author attributes to the Sienese painter Francesco Rustici, called il Rustichino, an unpublished canvas with a Saint Agnes, identifying its provenance from the collection of Girolamo Tantucci, Bishop of Grosseto. The circumstances of the work’s execution are linked with Rustici’s last Roman sojourn, when he was residing with his fellow citizen of Siena Orazio Brunetti in the house of Bishop Tantucci (1625). The study is built around two important pieces of evidence: the print made by Brunetti and bearing a dedication to Caterina Riccardi Niccolini — the wife of the Tuscan ambassador to Rome — and the record of a Saint Agnes by Rustici in the 1638 posthumous inventory of the Tantucci household. The slender oeuvre of the Sienese artist, who died prematurely at the age of thirty-four, is
thus enriched.

ROBERTA ZULIAN
Having arrived in Italy after the Second World War, Peggy Guggenheim immediately began displaying her rich collection of contemporary art. Starting with the celebrated exhibition at the 24th Venice Biennale, the collection was presented on many other occasions, in Italy and abroad, especially in the period between the end of the 1940s and the early 1950s. The Venetian archives have now yielded documents which have been forgotten for decades, showing how wellknown and thoroughly-studied exhibitions alternated with others of which all trace had been lost until now. The evidence is important because it allows for a clearer profile of Peggy Guggenheim as an enlightened patron and tireless promoter of her own collection.