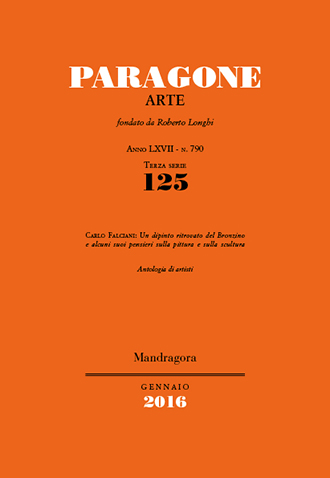 CARLO FALCIANI
The discovery of an autograph and signed painting by Agnolo Bronzino, a variant of the Virgin and Child with the Young Baptist and Saint Elizabeth in the National Gallery, London, enables one to study the artist’s habit of painting the same composition several times, varying the time of day, and therefore the lighting and colours in each scene. Two other works used for comparison are the Holy Family panels in the Kunsthistorisches Museum, Vienna, and in the Louvre. Bronzino also used different techniques of execution in these two pairs of paintings: glazes are used when the scene takes place in a nocturnal, whereas body colour is applied when the scene is set at dawn. Bronzino’s choice is discussed in the context of the thoughts he and Pontormo expressed in letters to Benedetto Varchi in response to the debate about the relative priority of the arts. A number of years before the canvas with the Portrait of the Dwarf Morgante — the work usually connected with discussions of the Paragone — Agnolo thus expresses the same ideas about the pre-eminence of painting over sculpture, and about its ability to represent changeable phenomena. These notions of his also seem to be in dialogue with Michelangelo’s choice of finishing his marble in different ways for the statues representing Day and Night, and Dusk and Dawn in the New Sacristy.

RICCARDO SPINELLI
The reappearance in a private collection of a relief with two winged figures flanking a coat of arms, dated 1586 and which can be associated with the Camaldolese convent of Santa Maria degli Angeli in Florence, allows for a tentative identification with the piece described in 1862 by an employee of the then Soprintendenza, Giuseppe Rondoni. He noted that the second cloister of the complex, the so-called “Chiostro dell’Ammannato”, contained a work with these elements, although he interpreted the incised date as 1580, perhaps because of the likely placement of the slab over a door, which would have led to the misreading of the fourth figure. During the 1580s, through the patronage of Don Silvano Razzi, Santa Maria degli Angeli was the setting for a number of works by Giovanni Caccini, the author of most of the sculpted decoration (above all busts), with forms and handling of the material not unlike the features found in the present relief; this is here attributed to Caccini, also because of its stylistic resemblance to other autograph works by the master produced in the same period.

GIANNI PAPI
The author presents an unpublished Saint Jerome Writing by Bartolomeo Manfredi, datable to 1617-1618 and offering clear stylistic parallels with the published Penitent Saint Jerome in the Koelliker collection, and the use of the same model. Both pictures reflect a temporary but significant proximity of the painter’s manner to the innovations introduced to the Roman artistic milieu by Jusepe de Ribera.

MARCO RICCOMINI
The article presents an oil sketch by Giovanni Camillo Sagrestani (1660-1731) which had appeared in auction in Rome with an incorrect attribution. The work is a significant addition to the oeuvre of the Florentine painter because of its relationship to his altarpiece in the church of San Lorenzo in Castelfiorentino, for which there exist two other small preparatory canvases, one formerly in the collection of Brinsley Ford (now untraced), the other in the Fogg Museum.

LISA LEONELLI
Giulio Pignatti or Pignatta (1679-1751), a painter from Modena who specialized in portraiture, arrived in Florence in 1706 with Cristoforo Munari, and remained there until his death. During the forty-five years he spent in the Tuscan capital, Pignatti had occasion to make contact with the last members of the Medici dynasty, with Grand Tourists (as attested by the Portrait of Sir Andrew Fountaine with four friends in the Tribuna of the Uffizi, dated 1715, a precursor of Johann Zoffany’s depiction of the gallery’s Tribuna), and with numerous Florentine noble families.
Pignatti’s slender oeuvre can now be expanded by six portraits commissioned by the Strozzi family and now displayed in the Palazzo Strozzi Sacrati in Florence, as well as four other paintings (two housed in the Corsi Collection of the Museo Stefano Bardini, one in the Museo di Casa Martelli and one formerly on the art market). These works contribute to a more accurate chronology, and give us a more precise and concrete sense of the artist.

ALESSANDRA DEL LUCA
The achievements of the Neapolitan painter Francesco De Mura (1696-1782) can now be expanded to include the canvas with the Madonna delle Grazie between Saints Philip Neri and Gaetano da Thiene in the church of San Paolo in Sorrento. This is the picture associated with the bozzetto now in the Molinari Pradelli collection, long believed to be a modelletto for a work that was never carried out. A reading of the early sources and guides to the city of Naples has also allowed for a reconstruction of the circumstances surrounding two canvases painted in 1752 for the tribune of the now destroyed church of San Gaudioso: the subjects were Christ and the Adulteress and Christ and the Woman of Samaria. The latter is identifiable with the painting now in the Seattle Art Museum.