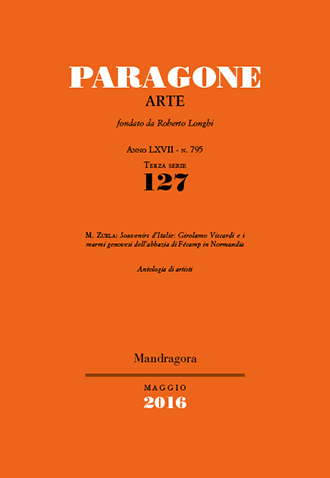 MICHELA ZURLA
The events that shaped the Italian peninsula in the decades around 1500 brought numerous foreign patrons into contact with local artistic production. The city of Genoa played a primary role in this context, and succeeded in establishing itself as the principal exporter of works in marble. It was in these circumstances that a commission came from Antoine Bohier, an important figure in the entourage of Louis XII, for a series of marble sculptures made for the Abbey of the Trinity at Fécamp in Normandy. In this case the sculptor, Girolamo Viscardi, was one of the most significant artists in Genoa at the beginning of the sixteenth century, a period in which sculpture underwent a decisive Classicizing renewal as it opened itself to precedents emerging from both the Certosa di Pavia and Tuscany.

ANGELA NEGRO
When the Galleria Nazionale d’Arte Antica in Palazzo Barberini, Rome, was refurbished in 2009, two small paintings on wood panel were rediscovered and restored: one is a Head of a Young Woman – very close to Vouet’s Saint Catherine of Alexandria in the Palazzo del Quirinale – and the other a Head of a Laughing Boy. The quality of the two pictures, both formerly in the Torlonia collection (in which they are inventoried as anonymous) has led to their being considered as autograph works by Simon Vouet, datable well into the 1620s. Indeed they are closely related to the painting now in the Museo del Prado, formerly in the collection of Cassiano Dal Pozzo, which is a secure work by the artist.

NOVELLA BARBOLANI DI MONTAUTO
It is here suggested that a battle scene that recently appeared on the art market as anonymous is in fact a mature work by the Flemish painter Livio Mehus. This is the largest known canvas by the artist, and his characteristic manner is evident in the Cortonesque composition, swift handling and flickering pigment. Its dimensions and mythological subject, drawn from the Iliad, suggest the work can be identified as the “Battaglia d’Achille furibondo sotto le mura di Troia” mentioned by Filippo Baldinucci in his biography of Mehus as one of the paintings executed for the Florentine silk merchant Francesco Camerati.

RICCARDO SPINELLI
A fine pastel Portrait of Francesco Maria Bartolini Baldelli, which according to an old inscription on the back of its protective panel was painted by Domenico Tempesti, is datable to the years around 1705 and is a significant addition to the artist’s oeuvre. Its high quality is emblematic of the subtlety of Tempesti’s psychological insight as portraitist, still in clear evidence during his late period.