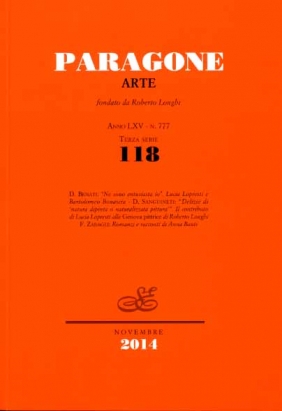 DANIELE BENATI
Among the multiple “attributions” to which the young Lucia Lopresti applied herself when writing to Roberto Longhi in 1921, a truly surprising appearance is the name of Bartolomeo Bonascia, which she connected to a Crucifixion with a Donor in the Museo di Castelvecchio, Verona, at that time ascribed to the Vivarini or to Jacopo Bellini. Only in recent years has the painting been reassigned to a follower of Piero della Francesca in Modena, precisely within the context of the outstanding Pietà by Bartolomeo Bonascia, signed and dated 1485 (Modena, Galleria Estense). Even if the painting in Verona might be better considered as by Cristoforo da Lendinara, as proposed by Carlo Volpe in 1979, Lopresti’s reading of it is particularly fitting, as well as being inspired by sincere enthusiasm for the then unknown Modenese artist. It is thus surprising that Longhi did not take his fiancée’s suggestion into account, when — first in his Piero della Francesca (1927) and later in the Officina ferrarese (1934) — he was to reassess Bonascia as one of the major proponents of Piero’s legacy in Emilia, together with Cristoforo and Lorenzo da Lendinara.

DANIELE SANGUINETI
This is the first study of a series of letters sent by Lucia Lopresti to Roberto Longhi between the spring and autumn of 1921 during the scholar’s “grand tour” of Europe with the collector Alessandro Contini. Among the many places visited by the young woman, Genoa was the subject of an extended sojourn, and she explored the city’s churches and museums, and those of the Ligurian Riviera to its east and west. What emerges is a lively exchange of correspondence, full of ideas, proposals and attributions, with a special focus — pioneering in its day — on the Genoese school of painting of the early Seicento (Ansaldo, Assereto, Borzone, Carbone, Carlone, Orazio and Giovanni Andrea De Ferrari, Strozzi, and Vassallo), and an initial cameo appearance by masters of the Quattrocento (Donato de’ Bardi and Carlo Braccesco).

FRANCO ZABAGLI
Anna Banti has been considered by highly authoritative critics as one of the most important Italian writers of the twentieth century, but her refined, complex style has not facilitated popularity. In 2013 her best novels and short stories were assembled in the foremost collection of classic literature published in Italy, Mondadori’s I Meridiani series. This enabled the reading public to have renewed access to works that had been long unfindable. This essay pays special attention to the stories published in 1971 in Je vous écris d’un pays lointain, in which the theme of time, a mainstay o Banti’s writing, is developed in particularly modern and original forms.