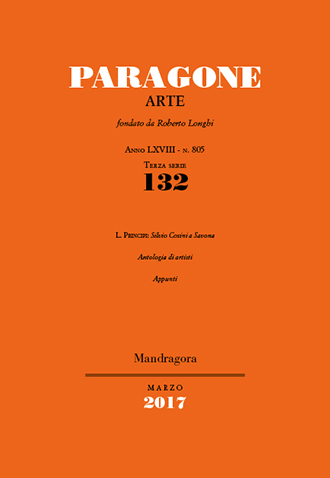 LORENZO PRINCIPI
The article regards additions to the oeuvre of the Tuscan sculptor and stucco artist Silvio Cosini, active in Florence, Genoa, Padua and Milan during the second quarter of the 1500s and a collaborator of Michelangelo and Jacopo Sansovino.
Specific attention is given to a relief of the Presentation of the Virgin in the Temple and a frieze of grotesque figures which originally formed part of this relief, housed in Savona Cathedral. Another work attributed to the artist is a Tabernacle for the Eucharist, formerly in the Palazzo del Brandale and recently moved to the Palazzo Vescovile. These discoveries cast new light on Cosini, highlighting his great talent not only as inspired decorator but as sculptor.
The analysis of style is further supported by the discovery of three documents attesting to Cosini’s presence in Savona between 1540 and 1544.

GIUSEPPE PORZIO
The author presents an unpublished altarpiece by the Bolognese painter Francesco Albani, housed in the Basilica of the Incoronata Madre del Buon Consiglio in Naples. A mature work by the artist, this grand canvas of The Virgin and Child in Glory with Saints Andrew, Peter, Paul and Francis of Assisi, adopts a composition Albani used several times, in the altarpiece painted for Santa Maria dei Servi in Rimini and in those for the Collegiate Church in San Giovanni in Persiceto. Given how it relates to a specific local context, it is possible that this is the painting recorded in the eighteenth century by Marcello Oretti in the Neapolitan church of San Giovanni in Porta.

GIANNI PAPI
The author presents an unpublished Susanna and the Elders by Ottavio Vannini, apparently datable to the end of the 1620s. At this point in his career the painter must have still been pondering on his training with Passignano, since the faces of the two old men, especially the one on the left, seem to express a certain tribute to the language of his master.

PAOLA BETTI
The author seeks to cast light on the Lucchese painter Antonio Franchi, with a focus on portraits and relations with patrons in his native Lucca. The article was prompted by the rediscovery of the Portrait of Rosa Maria Controni, referred to in the artist’s Carte manoscritte housed in the Library of the Uffizi Gallery. The work was carried out on the occasion of Rosa’s marriage to Federico Antonio Sardini, celebrated in 1701 when the sitter was seventeen, the age indicated on the inscription running along the upper contour of the oval canvas.

LUCA GIACOMELLI
During the first half of the eighteenth century, before its dispersal in a memorable Florentine auction of 1852, the Rinuccini collection underwent a decisive evolution under the aegis of Marchese Folco and his sons Carlo and Alessandro. Specific analysis of their acquisitions of Neapolitan painting and identification of works currently housed in various museums reveals that the family was in step with the period’s most advanced trends in taste. Folco Rinuccini took part in the division of the collection of the Marchese Del Carpio in Florence, acquiring notable works, and his son Alessandro, who had moved to Naples, subsequently made important purchases in situ. Finally, Carlo saw to the aggrandizement of the family in Florence through shrewd cultural politics, culminating in the restructuring of the Palazzo Rinuccini and the exhibition at Santissima Annunziata in 1737.