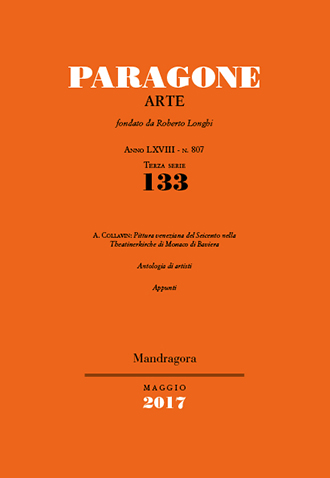 ALICE COLLAVIN
Between 1670 and 1677 the altarpieces destined for the Theatinerkirche arrived in Munich; the building of the church had begun in 1663. The author considers the history of the decoration of the church within the broader and more complex context of artistic and cultural politics of the Wittelsbach court during the regency of Ferdinand Maria (1651-1679) and Henrietta Maria Adelaide of Savoy.
Based in part on a chronicle of events, the article focuses initially on reconstructing the decorative projects in the Residenz and Nymphenburg Palace. This is followed by a broader reflection on how the Bavarian patrons directed their taste, exemplified both by the positive critical fortune North of the Alps of certain sixteenth-century Venetian painters (an altarpiece attributed to the school of Tintoretto), and by the preference given to those of the seventeenth (Liberi, Loth, Zanchi, Triva and Sandrart), whose reformulation of the language of the past contributed to the international promotion of Venetian painting even before its success in the eighteenth century.

ELISA ACANFORA
The discovery of another autograph version of Francesco Furini’s Announcing Angel clarifies the chronology of the artist’s early work. The hitherto unpublished painting presented here, which very closely resembles Furini’s first masterpiece, Painting and Poetry (Florence, Palazzo Pitti, Galleria Palatina), delivered in 1626, can now be considered to be the initial rendering of the subject, with respect to the versions known thus far, the Announcing Angel in the Koelliker collection, Milan (circa 1628) and the pair of pictures with the Angel and the Virgin Mary housed in a private collection in Florence; the dating of the latter is here postdated to about 1635.
Another work, a drawing attributed to Cigoli in the Musée des Beaux-Arts in Angers, is also assigned to Furini’s youthful oeuvre. In conclusion, the Head of a Young Woman on a sheet in the Uffizi is associated with the altarpiece in the church of Santa Maria a Vezzano – Furini’s “first work”, according to early sources.

ANDREA IMPROTA
The author publishes an illuminated antiphonary, now in a private collection in Verona, belonging to the same liturgical series as the choirbooks produced between 1585 and 1606 for the Dominican convent of Santa Maria della Sanità in Naples. Dated 1596, the volume is decorated with two illuminated initials. The Presentation in the Temple reiterates the altarpiece of the same subject painted by Giorgio Vasari in 1545 for the refectory of the monastery of Monteoliveto in Naples, and can be ascribed to the so-called “Maestro del San Tommaso”. The second initial, an image of Saint Agnes, should on the other hand be given to the Sicilian-born painter and illuminator Paolo Bramè, who in 1597 signed the Deposition in the Rosa di Villarosa collection, and who was no doubt responsible for two sheets in the Codice di Santa Marta in the Naples State Archives, dated 1600. The works here attributed to Bramè enable us to hypothesize a Neapolitan sojourn, and offer evidence of his close attention to the work of Marco Pino, the Sienese painter who had earlier been active in Naples, and from whom Bramè borrowed the model for the Villarosa Deposition.

ANDREA ZEZZA E STEFANO DE MIERI
The earliest record of the Spinola Holy Family, now in the Getty Museum, Los Angeles, and believed to have been painted by the young Giulio Romano after a drawing by Raphael, only dates to 1801, when it was purchased from the palazzo of Vincenzo Spinola in Genoa. This article presents new evidence for the reconstruction of the history of this painting, which is identified as a work described in 1607, as by Raphael, in the inventory of the Neapolitan collection of Matteo di Capua, Prince of Conca.
Two elements make such an identification more likely. The first is that members of the Spinola family were among the principal creditors of the di Capua family when the collection was dispersed; the second is that a rare copy of the painting was inserted into a grand polyptych dedicated to the Holy Trinity, here attributed to the Flemish artist Wenzel Cobergher, painted for the Capuchin church in Giffoni Valle Piana, a feudal property of the Prince of Conca.