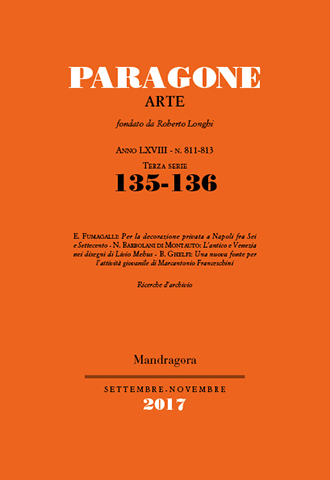 ELENA FUMAGALLI
This article reviews the history of secular decoration in seventeenth-century Naples, with a focus on surviving works by Francesco Solimena and Giacomo Del Po from the end of the Seicento and the beginning of the eighteenth-century. The study of these works focuses on the decorative solutions employed by the two painters. As regards Del Po, the author draws attention to the connections, previously unnoticed, with the specific ornamental vocabulary of applied arts, drawn from the repertoire invented by Johann Paulus Schor. This became widespread through the work of his sons Philipp and Christoph, as well as through albums of engravings by artists such as Filippo Passarini.

NOVELLA BARBOLANI DI MONTAUTO
The biographies of Livio Mehus and other documentary sources reveal that during his first twenty years, guided by Pietro da Cortona and Stefano della Bella, the artist applied himself above all to graphic art. Special mention is made of his studies after the antique, and after the Venetian masters of the sixteenth century. These two categories of drawings, which occupied Mehus during his sojourns in Rome and Venice in the 1650s and 1660s – when he also worked as consultant, collecting drawings on behalf of Leopoldo de’ Medici – are the subject of this article. A considerable number of sheets are presented here, consisting of copies of famous ancient monuments (including marble sculptures housed in the Villa Medici, Trajan’s Column, and the statue of Marcus Aurelius) as well as of some of the most celebrated canvases in Venice (Titian, Paolo Veronese and Jacopo Tintoretto), with specific notes on attribution, iconography and provenance.

BARBARA GHELFI
An unpublished manuscript entitled Memorie di Marcantonio Franceschini, recently discovered in the Archive of the Hercolani family in Bologna, casts new light on various aspects of the painter’s career, starting with his early years. The evolution of Franceschini, one of the most emblematic representatives of Bolognese Classicism, is documented in an entirely valid way, yet these Memorie offer the most accurate picture of the artist’s activity in the period 1668–1684. The first part of the manuscript introduces unpublished information on over forty works not mentioned in other sources, which can now be defined as regards subject, format (occasionally), patronage, destination, and price. These consist in most cases of sacred and secular paintings made for private individuals: the Memorie provide a true opportunity for reconstructing a history of Franceschini’s first patrons.