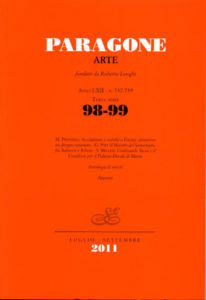 MARTA PRIVITERA (1)
A drawing by Giovan Battista Armenini — copying a lost sheet drawn by Vasari for the scene of The Deliberation for the War with Siena on the ceiling of the Salone dei Cinquecento — prompts an analysis of the concepts of absolutism and nobility in Florence as expressed in the mid-sixteenth century. The sheet shows Cosimo de´ Medici surrounded by his courtiers, the noble virtuosi who from a ring around the Prince; but Cosimo rejected the composition, wishing to be depicted alone, together with personifications of his virtues — that is, the endowments that anoint him as absolute Prince. With the decoration of the ceiling of the Salone dei Cinquecento Cosimo I declared his role as absolute sovereign, in tandem with how the concept of nobiltà was redefined according to the treatises of Borghini, Varchi and Ammirato, so as to legitimize the power of the new Duke and the status of courtiers and officials.

GIANNI PAPI
After defining the stylistic differences between Dirck van Baburen and David de Haen, the author introduces an important new artist, probably Dutch, who can be associated with these two painters and the circle of Pietro Cussida, which also saw Jusepe de Ribera in a prominent role. An initial corpus of works by this anonymous master is presented, bringing together the notable Apostolado in the Accademia di San Fernando in Madrid and four other paintings, including a Good Samaritan (formerly on the German art market) that constitutes the name piece of the group.

SANDRO BELLESI
Archival documents and stylistic analysis provide evidence for identifying an unpublished, privately-owned and only recently documented work as the bronze Crucifix by Ferdinando Tacca formerly in the Palazzo Ducale in Massa. Of excellent quality and in a perfect state of preservation, the bronze shares the style of two other Crucifixes by the sculptor, based on the same model and of identical dimensions, housed in the Cathedrals of Pietrasanta and Prato. Datable to the period between 1647 and 1650, this work represents a significant addition to the artist´s oeuvre, given our current state of knowledge.

MARTA PRIVITERA (2)
Two new attributions to Girolamo Macchietti are presented here: the Portrait of a Young Woman dated 1565, now in the Seattle Art Museum, and the Virgin and Child with the Young Baptist in a Landscape, of which a fine autograph copy exists, both in private collections. These paintings are of high quality and enrich our knowledge of Macchietti´s early maturity, confirming his ability to fuse distinct stimuli — Florentine, Roman and Emilian — into a personal, refined and elegant language that was also communicative.

MINA GREGORI
The author studies an unpublished Saint John the Baptist, using broadly-based stylistic comparisons to attribute it Orazio Gentileschi with a date in the 1620s.

RICCARDO SPINELLI
An unpublished document discovered among the Gerini family papers in the Florentine State Archives brings to light the record of a painting by Artemisia Gentileschi of Psyche gazing at Cupid by the light of an oil lamp. This untraced work was painted in 1642 as a pendant to a canvas by the Florentine artist Giovanni Martinelli, and is recorded in an engraving by Lorenzo Lorenzini based on a drawing by Giuseppe Zocchi for the Raccolta di ottanta Stampe of the Gerini collection, published in 1786.

GIANNI PAPI
The author attributes a Saint Sebastian (Warsaw, National Museum, formerly ascribed to Francesco Guarino) to Jusepe de Ribera, hypothetically dating it to 1617; its close relationship to the Saint Sebastian in the Collegiate church in Osuna suggests the new work may have been an initial version, more audacious and innovative, of the canvas in Spain.

ENRICO MARIA DAL POZZOLO
The article presents an unpublished Salvator Mundi by Ribera, signed and dated 1646. The Byzantine-type Pantocrator composition — often adopted in Italian Renaissance painting, but only rarely during the Baroque age — places the work among the Ribera´s “retrospective” works, which appear in his oeuvre intermittently, between the mid-1630s and — as here established — 1646.

FEDERICO BERTI
The author traces an artistic and critical outline of the little-known painter Francesco Perezzoli, a native of Verona who was active there and in Rome, Bologna and Milan between the late seventeenth and early eighteenth centuries, and establishes Perezzoli´s authorship of numerous pictures from different phases of his career, hitherto attributed to various artists. The stylistic range reflects the painter´s initial adoption of the language of his teacher Giulio Carpioni and the subsequent shift towards Poussin and his contemporaries.

FABIO SOTTILI
The article discusses the theatrically-themed paintings that formed part of the decoration of the Villa Sansedoni at Basciano, near Siena. New archival information indicates a Basciano provenance for the series of fifteen canvases of Harlequin by Giovan Domenico Ferretti (Sarasota, The John and Mable Ringling Museum of Art); these appear to have originally been eighteen in number, with Pulcinella sharing the protagonist´s role. Another group of pictures in the villa at Basciano, also studied here, was painted by Francesco Gambacciani and consisted of commedia dell´arte scenes based on German prints by Johann Balthasar Probst.