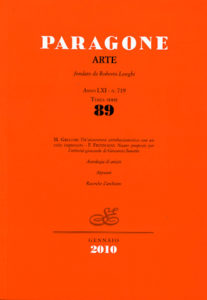 MINA GREGORI
Franz Werner von Tamm is known above all as a still life and flower painter working in Rome. After his activity there he moved to Vienna and painted canvases with hunters and game, and sacred subjects for churches in Austria and Lower Bavaria. He is presented here as a painter of genre pictures, with an unpublished ‘Adoration of the Shepherds’, and ‘Figures in a Rural Setting’ formerly attributed to Giacomo Ceruti.

FRANCESCO FREDDOLINI
The article analyzes aspects of the Florentine career of Giovanni Baratta (1670-1747), the sculptor from Carrara, adding some works to his known corpus. A study of his youthful output allows the statue of ‘Saint Dominic Defeating Heresy’ (Florence, convent of San Marco), traditionally attributed to Andrea alone, to be considered as a work of collaboration with his uncle Andrea Baratta (1639-1721). Another work here ascribed to Giovanni Baratta’s early period is the ‘Angel-lectern’ in the Certosa di Calci (Pisa), hitherto believed to be an autograph work by Andrea Vaccà. This attribution makes it possible to assign to Baratta the fragment of a lost statue formerly in Livorno, and to regard the two holy water stoups in the church of San Matteo in Pisa as by his workshop. Last comes a reconsideration of the stucco cycle in the Palazzo Marucelli-Fenzi in Florence, with a proposal for Giovanni Baratta’s authorship of the sculptural decoration of the room with the fresco of ‘The Punishment of Cupid’ attributed to Antonio Puglieschi.

MINA GREGORI
The oeuvre of the Monogrammist S.B. comprises many paintings formerly attributed to Tommaso Salini, and to the Neapolitan Luca Forte. An unpublished work prompts a consideration of his activity as animal painter, which probably began as early as the 1640s.

MARCO RICCOMINI
An exploratory reconnaissance in the museum store-rooms of the Belarusian capital, and some new works from the Italian Seicento.

LIONELLO PUPPI
Our knowledge of the correspondence relating to Titian is here enriched by two groups of letters, four rediscovered, and eight unpublished. First, the author identifies the current locations of four letters published in the nineteenth century and consequently regarded as lost. One, written by an anonymous kinsman of the painter on 15 October 1534 (now in the Biblioteca P. Bertolla of the Archiepiscopal Seminary in Udine) regards the relations between the community of Pieve di Cadore and the Government of Venice; the second, from Argentina Pallavicini Rangone to Titian on 26 April 1549 (now in the Biblioteca dei Concordi, Rovigo), expresses the gentlewoman’s wish to place a young protégé with the master, and refers to a portrait of Lavinia, Titian’s daughter; the third, dated 15 June 1567 (now in the Biblioteca Comunale, Forlì), was written to accompany Titian’s gift to Margaret of Austria of the engraving by Cort reproducing the so-called ‘Gloria’ painted for Charles V; the fourth (now in the Biblioteca Palatina, Parma) addressed by Titian to Cardinal Alessandro Farnese on 10 December 1568, asks for news of a ‘Saint Catherine’ that the painter had sent — but without a response — to the “cardinal Alessandrino”. Of the eight unpublished items, all discovered in the Biblioteca P. Bertolla of the Archiepiscopal Seminary in Udine, two are of special interest: a draft letter from Titian, datable between 11 November 1554 and June 1555, to Antoine Perrenot de Granvelle, who was eager to have a copy of a ‘poesia’ painted for Philip of Habsburg; and a reply from Titian to Granvelle written in January or February 1559, referring to a self-portrait. A missive from Gonzalo Pérez to Titian on 25 September 1565 is significant for its references to the ‘Last Supper’ and ‘Martyrdom of Saint Lawrence’, while an urgent note of Francisco de Vargas to Philip of Habsburg between 1552 and 1553 requests the painter’s son Pomponio be given Spanish “naturaleza” (citizenship). The remaining unpublished letters regard above all the management of the painter’s benefices.

SILVIA BENASSAI
Thanks to the discovery of an unpublished eighteenth-century manuscript in the Florentine State Archives, attributions can be provided for the thirty-five painted lunettes that constitute the decoration of the so-called Chiostro dei Morti of the church of Santo Spirito in Florence during the seventeenth and eighteenth centuries. Until now only one part of this cycle had been recognized, and it is now possible to identify the contributions of Tuscan painters such as Giacinto Botteghi, Giovanni Perini, Niccolò Nannetti, Pier Dandini, Giovanni Cinqui, and Giovanni Bagnoli. Furthermore, the document enables us to reconstruct the subsequent evolution of the chapter-house altar, once adorned with a now lost fresco by Anton Domenico Gabbiani (who also painted two versions of the ‘Pietà’), later replaced by a canvas by Antonio Puglieschi. Finally, the manuscript allows for the entire cycle of lunettes frescoed with Stories of Saint William in the Sala del Silenzio to be attributed to Stefano Cascetti, a little-known Florentine painter who was a pupil of Domenico Passignano and was active during the first half of the eighteenth century.