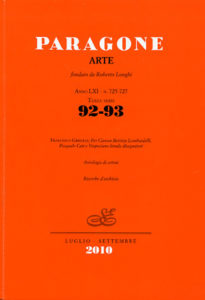 Francesco Grisolia
Until now, the drawings of the Marchigian artist Giovan Battista Lombardelli, active in the Marches, Umbria and Rome during the last quarter of the sixteenth century, have remained little known (unlike his paintings), forming a body of work based on uncertain attributions and lacking any comprehensive analysis. As well as affirming his authorship of four unpublished drawings — in the Drawings Cabinet of the Uffizi Gallery, preparatory for the cycle of frescoes in the Palazzo Cesi in Acquasparta — the article also considers the sheets attributed (early on, in many cases) to Lombardelli, some demonstrably autograph and connected with known works, and others discarded. Of special importance is the group of drawings in the Istituto Nazionale per la Grafica in Rome, attributed decades ago by Walter Vitzthum; others are in the collections of the Musée du Louvre and the Metropolitan Museum of Art. Among the rejected drawings, two distinct groups divided between various public collections are here given to the painters Pasquale Cati and Vespasiano Strada. In the case of Cati, whose firmly attributed drawings are extremely rare, there are three red chalk studies, preparatory for the Moses cycle in Palazzo Altemps, Rome. As for Strada, by whom only one secure drawing was known, five sheets are attributed here, all preparatory for the frescoed lunettes in the cloister of Sant’Onofrio al Gianicolo. Every work examined clarifies these artists’ careers and style, enabling us to identify and resolve the confusion surrounding many drawings in the complex and sometimes still cloudy phenomenon of Late Roman Mannerism.

Marco Simone Bolzoni
Although the Roman church of Santa Caterina dei Funari is one of the most important sixteenth-century ecclesiastical foundations in the Eternal City, it is still little known today. The church was built ex novo at the wish of Cardinal Federico Cesi, and contains the work of the best-known Roman artists of the later sixteenth century, including Federico Zuccari and Girolamo Muziano, and once also housing works by Livio Agresti of Forlì, now lost. Indeed when the church opened its doors in 1565 Agresti was commissioned to paint the entire cappella maggiore with scenes from the life of Saint Catherine of Alexandria. Some unpublished drawings, presented here with a new attribution to the artist, enable us to reconstruct the original projects for the chapel’s frescoes, never begun because of the patron’s premature death, and for three altarpieces, now replaced by three eighteenth-century paintings.

Bruno Toscano
A connecting thread clearly links the three articles by Francesca Coltrinari, Fabrizio Federici and Beatrice Cirulli, each treating works that are lost, fragmentary, or surviving only through descriptions in early sources. The three historical accounts also share a common methodological approach, suggesting that the paths to attribution can become particularly perilous when they have to take into account areas and periods with only meagre surviving works, as well as shifts in style and practice that are sluggish and not without apparent inconsistencies. Moreover, the widespread existence of instances of this kind, habitually involving not only contiguous geographical areas but also — within an intricate nexus of circulation — artistic milieus and circles from further afield, can generate identifications (or even comparisons), and consequently dates, that are less secure.

Francesca Coltrinari
A notarial deed of 1429 informs us of an altarpiece, now lost, painted in Recanati by Bartolomeo di Tommaso da Foligno and Domenico di Paolo da Recanati, and sent to the church of San Francesco in Ascoli using a sea route; the work had already been begun by another artist, “maestro Piero”, most likely Pietro di Domenico da Montepulciano. The summary description given in the document suggests a hagiographical painting of unusually complex structure and iconography, parts of which may exist in Italian and foreign museums. A look at the broader context of how the commission came about – especially with the benefit of documents, though almost entirely lacking surviving works – reveals a wealth of art-historical information, notably the commission to Olivuccio di Ciccarello of Camerino (in the same year, 1429) of a painted altarpiece with the Adoration of the Magi for the altar of Filippo Maria Visconti, Duke of Milan, in the church of Santa Maria in Loreto. This was significant not only for the individuals involved – Carlo Malatesta, Lord of Cesena, and the Duke’s Milanese agents – but also for the magnificence of the painting itself, gleaming with gold and pastiglia reliefs.

Fabrizio Federici
The author offers a reconstruction of the lost triptych painted by Giovenale da Orvieto in 1441 for the Mancini chapel in Santa Maria in Aracoeli, Rome. He bases this on two sources: the description of the work in a treatise on the cult of Saint James, published by the Spanish churchman Miguel de Erce y Siménez in 1644 and recently drawn on by Rosa Vázquez Santos, thanks to whom the three predella panels of the altarpiece have been identified; and the description incorporated in the unpublished treatise Delle memorie sepolcrali, assembled by the collector Francesco Gualdi with the assistance of several collaborators between 1640 and 1644. The article concludes by setting Giovenale’s painting within the context of Roman politics and art of the early 1440s.

Beatrice Cirulli
Basing her research on a notarial deed of the concession of a chapel by the Olivetans of Santa Maria Nova in Rome to the oblates of Santa Francesca Romana in April 1442, the author proposes the chapel’s altar as the provenance of three small panels: The communion and oblation of Saint Francesca Romana, The Virgin grants her protection to Francesca and her oblates, and Francesca taken into Heaven cradles the Christ Child in her arms, now divided between the Walters Art Gallery, Baltimore and the Metropolitan Museum of Art, New York. These panels would have been part of a very large retable with stories of the saint that was replaced, perhaps as early as the end of the fifteenth century, by the panel by Liberale da Verona still housed in the residential part of Santa Maria Nova.