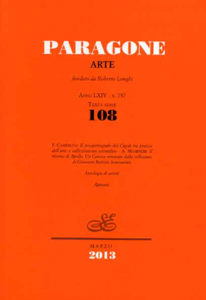 FILIPPO CAMEROTA
The idea that Lodovico Cigoli’s perspectograph could have been connected in any way with the Medici collection of scientific objects has crossed the author’s mind more than once, but always superficially. Two new drawings now enable us to go deeper, strengthening the hypothesis that the instrument was made by the artist with a personal wish to see it displayed, together with the treatise that describes its operations, in the celebrated Stanzino delle Matematiche of the Uffizi Gallery. The sheets (in the Kupferstichkabinett, Berlin and Library of Congress,Washington, DC) illustrate two versions of the instrument that we might define a ‘collectors’ item’. In particular, the second — a work by Giulio Parigi — has ornamental elements that resemble those found in the example seen by Jean-François Niceron in the collection of the Councillor of the King of France, Louis Hesselin; and it is likely that the latter, perhaps a gift of Leopoldo de’ Medici, is the very one made by the artist for the Medici collection.

ANTONELLA MAMPIERI
A study of documents and style have led to the rediscovery of the Young Apollo or Apollino, made by Antonio Canova in 1797, now housed in the Collezioni Comunali d’Arte, Bologna. Until recently believed lost, the marble was purchased directly from the sculptor by the French artist Juliot, and was subsequently acquired by Giovanni Battista Sommariva for his house in Paris. A keen collector of Canova’s statues, Sommariva had no less than four of them (apart from the Apollo, he owned the Kneeling Magdalen, Terpsichore and Palamedes), three of which were still in his Parisian residence in 1839, when they were offered for auction together with other works in his collection. During the second half of the nineteenth century — through passages of unclear provenance — the Apollo was then owned by the sculptor Cincinnato Baruzzi, a pupil of Canova’s who displayed it in his villa-museum on the Bolognese hills. At his death the statue entered the collection of the Comune di Bologna.

GIACOMO A. CALOGERO
This article offers a new attribution to Agnolo Gaddi, an important Florentine painter active in the last quarter of the fourteenth century: a panel with Saint Julian and Saint Benedict donated by the De Piro family to the Cathedral Museum of Mdina, Malta, in 1995. The painting, erroneously displayed as the work of an anonymous Florentine of about 1420, shows all the typical features of Gaddi’s style. A comparison is made with the cycle of frescoes in the Castellani Chapel in Santa Croce, painted by Gaddi during the first half of the 1380s, in order to provide a more accurate dating for the painting in Malta. It is also suggested that the panel could originally have formed a part of the polyptych centred around the Contini Bonacossi Madonna in the Uffizi Gallery, Florence.

MINA GREGORI
A full-length figure of Saint Charles Borromeo after his canonisation is published for the first time, together with two other unpublished works by Saraceni.

MARCO RICCOMINI
Two red chalk drawings unearthed among the anonymous sheets in the Pinacoteca Civica, Varallo, are here attributed to the Bolognese artist Ubaldo Gandolfi. One of them matches a drawing in the Fondazione Giorgio Cini in Venice; the other, an image of Clemency, is a study for the monochrome painting of the same subject frescoed by Ubaldo in a salone of the Palazzo Malvezzi in Bologna as part of the Apotheosis of Hercules.

FABRIZIO CORRADO E PAOLO SA MARTINO
The authors study the carved high relief panels with Stories of Hercules of two Mannerist cassoni formerly in the Lercari collection in Genoa, housed since 1845 in the Palazzo Reale in Turin and hitherto considered anonymous, and attribute them to Pietro Francavilla. These are the only known works in wood by the sculptor, whose biographer Filippo Baldinucci records that when he was working for the court of Ferdinand of Tyrol, he worked for no less than five years with a wood-carver. The cassoni can be dated to Francavilla’s Genoese period, and combine the spatial, geometric and academic approach of Luca Cambiaso with a sense of form that looks to Northern European art.

GIANLUCA FORGIONE
The focus of this article is on certain key aspects of Bernardo Cavallino’s career, from his youthful contact with the works of Carlo Sellitto and Jusepe de Ribera — indeed suggesting that the beginner was actually in the Spanish painter’s workshop — to the cornerstones of his late oeuvre. Among these, the Adoration of the Shepherds in Cleveland can here be judged by comparison with the sketch of the same subject in a private collection, hitherto considered lost; while other new attributions are now reconsidered in the light of workshop practice, or through their close formal similarities with the work of Artemisia Gentileschi.