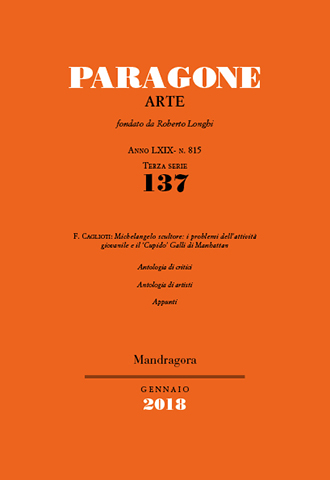 FRANCESCO CAGLIOTI
Specialised studies on Michelangelo continue to face two areas of difficulty regarding his youthful style as a sculptor. On the one hand they are spoiled by the major turning point typified by works such as the Vatican Pietà and the David, with scholars failing to accept that the artist went through a formative period of growth that had not yet reached those exalted points, and was instead powerfully steeped in fifteenth-century culture. On the other, scholarship has been led astray by the enormous fame bestowed on masterpieces such as the two mentioned above or the tomb of Julius II, overlooking the fact that since Vasari himself, and for about three more centuries, the master’s ‘minor’ sculptures stood on the margins of that critical fortune, if not beyond it. Because these works, especially the youthful ones, were unrelated to the ‘Maniera Moderna’, they remained hidden among the under-appreciated sculptures of the Early Renaissance, and the belated reappearance of some of them in the twentieth century has nothing intrinsically strange or suspicious about it. Set against this background, the article jointly considers three fifteenth-century sculptures by Michelangelo rediscovered during the last half century (the Crucifix in Santo Spirito, the Young Saint John the Baptist in Úbeda and the Galli Cupid in New York), focusing on the difficulties in their being definitively admitted to the artist’s catalogue, but above all on the powerful reasons for their inclusion. Stylistic resemblances between these pieces and the rest of Michelangelo’s oeuvre can be found, not without a few surprises, within both his established early output and his maturity, reaching as far as the Rondanini Pietà.

FRANCESCO CAGLIOTI
A passage in the second edition of the Life of Michelangelo – in which Giorgio Vasari takes his cue from the difficulties encountered in carving the Bandini Pietà to explain the master’s “nonfinito” – contains a slightly corrupt passage, starting with its publication in 1568. Consequently, when the biographer listed the few marble “statues” Michelangelo left entirely “finished”, it is unclear whether he meant to refer, as examples, solely to the Bacchus, the Vatican Pietà, the David, and the Minerva Christ, or also to four figures in the New Sacristy (Giuliano, Lorenzo, Night, Dawn) and three figures from the Tomb of Julius II (Moses, Rachel, Leah), thus producing a list, complete in its own way, of only eleven sculptures. An attentive review of the text, misunderstood in all subsequent editions of Vasari until now (with the sole exception of an English edition), shows that the writer was thinking of eleven statues overall, forgetting nearly all of Michelangelo’s first works in marble. This amounts to a true prelude to the misfortunes – not just critical but material – that befell some of the artist’s youthful masterpieces right up to the nineteenth century.

DANIELA SCAGLIETTI KELESCIAN
The recent discovery of a painting by Amico Aspertini, recorded in the 1623 and 1633 inventories of the collection of Cardinal Ludovico Ludovisi in his villa on the Pincian Hill in Rome, has revealed an interesting facet of the Bolognese painter’s activity. The subject, which remains hard to interpret, has been studied with a view to clarifying its underlying cultural and religious references, now identified in a passage from the Book of Revelation. This foretells the destruction by fire of Rome/Babylon,“the dwelling-place of devils”, confirmed by the presence of animals such as the giraffe and frogs, symbols of vice and sin. The work can thus be seen as a figurative adaptation of themes that were spreading by way of Luther’s sermons in the restless climate of the first decades of the sixteenth century.

CARLO FALCIANI
An unpublished portrait, attributable without difficulty to Francesco Salviati on the basis of style, allows for a new reconstruction of the artist’s relations with Florence around the year 1548, just before his permanent departure for Rome. The sitter, Carlo Rimbotti, can be identified, and his age established as thirty thanks to some faint but ancient inscriptions on the back of the panel. Until now only one documentary reference was known, in the will of Carlo’s son Tommaso Rimbotti. The sitter was born in 1518, studied medicine at Bologna University and was aged thirty when Salviati portrayed him in 1548. He had become a practicing doctor in 1543, but had been admitted to the Florentine Academy in January 1542, participating actively in academic life and giving three public lectures. We know that the last of these, delivered in December 1542, before he formally took up his profession, was about a sonnet by Petrarch, and it may be for this reason that the portrait shows him holding a small book – perhaps a petrarchino – rather than medical instruments.

GABRIELE LANGOSCO
Working in Genoa, the Ticinese sculptor Taddeo Carlone (1543-1615) recurrently adopted Tuscan statuary models. While in the first half of the sixteenth century Genoa had been enriched by the works of artists such as Andrea Sansovino and Giovanni Angelo Montorsoli, Taddeo’s period of activity saw the presence of Giambologna and especially Pietro Francavilla. As has been recognised, such artists were summoned from Grand Ducal Florence partly because of the commission of bronze statues for the Grimaldi chapel in the now destroyed church of San Francesco di Castelletto. Giambologna was present in Genoa only in 1579, whereas Pietro Francavilla returned several times working with Taddeo Carlone for the Senarega chapel in the Cathedral of San Lorenzo. The discovery of new documents referring to this funerary chapel, including the drawing for the project, offers an occasion to clarify the role played by Taddeo in the construction and decoration of the chapel. The author is thus able to identify the extent of Pietro Francavilla’s influence on the sculptural and architectural oeuvre of Taddeo Carlone.

ODETTE D’ALBO
The article reconstructs the events relating to the painting of Giulio Cesare Procaccini’s large-scale Saint Charles Borromeo in Glory with Saint Michael the Archangel, now in the National Gallery of Ireland in Dublin. According to a letter of 1628 from the painter Antonio Mariani della Cornia to Federico Borromeo, the work was rejected by its patron, hitherto unidentified but now for the first time recognised as the Compagnia dei Lombardi in Florence, which in 1615 had based itself in the oratory known as San Michele vecchio, now the church of San Carlo dei Lombardi. In addition to this hypothesis, the author studies other instances connecting Procaccini and Florentine patrons, and in particular Grand Duke Cosimo II de’ Medici.